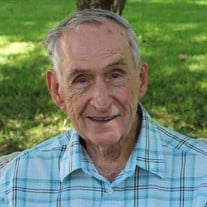 Robert "Bob" Lewis Salmon, Lt. Commander, USN (Retired) passed away at his home on April 29, 2022 at the age of 92 surrounded by his loving family. Bob was born in Columbia, Missouri in October 1929, to John Leland and Lillie Salmon. He graduated from Chillicothe High School in Chillicothe, Illinois. He soon enlisted in the United States Navy and after attending Officer’s Candidate School, he was commissioned as an officer and received his wings in 1955. While stationed at NAS Pensacola, he met the love of his life, Ola Anderson Salmon and they were married in August 1955. The two were each other’s lifelong companions and best friends and were married for over 66 years. Together, Bob and Ola served their country assigned to various duty stations in Jacksonville, FL, Norfolk, VA, Washington DC, Newfoundland, Denver, San Diego, Italy, Spain, Iceland, Milton, FL and more. Bob was stationed aboard the USS Oriskany during the Vietnam War. While in the Navy, he was a pilot, an Intelligence Specialist, Aerial Photographer, Transportation Officer, Communications Officer with his final assignment for the Navy as a Flight Instructor at Whiting Field, near Milton, FL. Bob flew many different types of airplanes including the EC-121 WV-2 Willie Victor, Sea planes, T-28 just to name a few. After completing 20 years of service, Bob retired from the Navy with an Honorable Discharge. Post-military, Bob attended Auburn University, graduating in 1977 with a degree in Pharmacy and was employed at Sacred Heart Hospital for approximately 20 years. The best phrase that describes Bob is “He asked for so little, but gave so much”. He was a man of many talents and enjoyed assisting his friends and family in a variety of different projects. Bob was known to participate in home construction and repairs, the building of decks and barns and was extremely knowledgeable in automotive repair. Bob had a love for science fiction as well as science and technology. He was an early computer enthusiast, teaching himself the necessary skills and programming languages necessary to write his own programs. No matter the situation, or how badly something was broken, we could always count on him to put it and us back together. Some of Bob’s favorite things were spending time with his ever-growing family, boating, fishing, studying astronomy, cheering on his grandkids in their many soccer games, walking on the beach, watching Star Trek and eating Katelyn’s delicious chocolate chip cookies. With his wife Ola, Bob was a member of Immanuel Lutheran Church where he was baptized and confirmed at the age of 86. Bob is preceded in death by his parents and brother, John Leland Salmon, Jr. Those who are left to cherish his memory are his loving wife, Ola; his two daughters Pamela Norman (Sam) and Kathy Vance (Danny); his grandchildren Matthew Norman (Lauren). Timothy Norman (Stephanie), Nicholas Norman (Meredith), Katelyn Howard (Hunter) and his great grandchildren Aiden, Oliver, Tobias, Sage, Alice, Grant, James, Theodore, and Porter; his many granddogs and many loving nieces and nephews. Our heartfelt thanks to Brittany, Jose and the caring team at Vitas Hospice. A memorial service will be held at Immanuel Lutheran Church at 24 W. Wright Street, Pensacola, FL on June 1st, 2022, 10:00 am (visitation at 9:30). Interment will follow at 11:30 at Barrancas National Cemetery, NAS Pensacola, FL Pallbearers are Matthew Norman, Timothy Norman and Nicholas Norman. In lieu of flowers, we ask for donations to be made to Immanuel Lutheran Church or Vitas Hospice.

Robert "Bob" Lewis Salmon, Lt. Commander, USN (Retired) passed away at his home on April 29, 2022 at the age of 92 surrounded by his loving family. Bob was born in Columbia, Missouri in October 1929, to John Leland and Lillie Salmon. He graduated... View Obituary & Service Information

The family of Robert Lewis Salmon created this Life Tributes page to make it easy to share your memories.

Send flowers to the Salmon family.