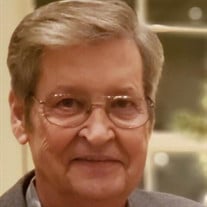 William “Frank” Winters passed away suddenly on Thursday, April 28, 2022. He was born on April 9, 1946, in Cordova, Alabama. Frank served 21 years in the U S Navy with his field of speciality as an Aviation Storekeeper. He had the honor of being selected as a member of the Blue Angels team during his Naval career. He was humbled by and proud of this distinct privilege. Frank enjoyed sharing many memories of his deployments on numerous carriers. After retiring from the Navy as a Chief Petty Officer, Frank began his civil service career of 21 years in Supply and as an Aviation Storekeeper. For many years, Frank was an avid bowler and proud that he was able to score at least one perfect game… In more recent years, Frank liked the simple life…..family, friends, and fellowship!!! For the past 10 years, every Wednesday , he was an active volunteer producing Braille Bibles for the Lutheran Braille Workers Inc. and was a member of Redeemer Lutheran Church. Quite a guy, this Frank Winters, and he is sorely missed by all who love him endlessly. Frank was preceded in death by his parents, Holly and Cora Winters, his brothers Ray and David Winters. He is survived by his wife, Leona, daughters Kelly Winters and Sabrina Cook, Papaw’s grandchildren Jade, Justin, and Tristan. Bonus children, Shari (Glenn) Alberson, James (Melatine) Bragan, and Tina (Rick) Lazauskas. Papa Frank’s Grandchildren - Hannah (Anderson) Waxler, Kayla (Caleb) Jackson, Maddie and Molly Bragan. Great grandboys are his special sidekick and pal Olly, and future linebacker Kellan, and future comedian Jordan!!!!! Survivors include loving brother Dennis (Carol) Winters, sister Judy (Richard) Sherrill, and sister Shirley (Russell) Johnson and many other relatives. In lieu of flowers, we are choosing to honor Frank with donations to: Lutheran Braille Workers P. O. Box 5000 Yucaipa, CA 92399 Redeemer Lutheran Church 333 Commerce St. Pensacola, Fl 32507 St. Paul’s Lutheran Church 400 Alston St Foley, Al 36535

The family of William Franklin Winters created this Life Tributes page to make it easy to share your memories.

Send flowers to the Winters family.