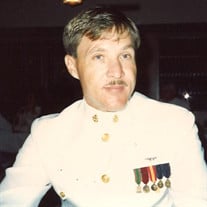 Today we honor the life and legacy of Retired Navy Senior Chief Petty Officer William T. Ellerby Jr., 68, of Pensacola Florida, who passed peacefully on February 6, 2022. He is preceded in death by his father, Newton Barner, Mother, Irmgard Barner, stepsister, Theresa Brooker and stepbrother, Newton Barner Jr. He is survived by his wife of 49 years, Eleanor Ellerby. Three daughters, Susan Anderson, Irmgard Ellerby, and Ethelyn Ellerby-Rodriguez. Son in Law, David Anderson. His 8 grandchildren, William Ellerby, Cassandra Ellerby, Thomas Ellerby, Alana Ellerby, Dakota Rodriguez, Xavier Rodriguez, Nathan Quina, and Noella Rodriguez. His two sisters, Karen Echlich and Mary Pauldine, two brothers, Robert Ellerby and Joseph Barner and three stepbrothers, Roger, Perry, and Wayne Newton. He is also survived by his numerous brothers-in-law, sisters-in-law, nephews, nieces, cousins and friends. William was born in Frankfurt am Main Germany on April 2, 1953, to Irmgard and William Sr. At 2 years of age his mother and father divorced, and his mother would go on to meet and marry Newton Barner, who raised William and his siblings as his own. William had a “normal” childhood growing up in Howes Cave, New York, as well as in Cobleskill. During his childhood he played in the woods, climbed trees, and went fishing with his dad and brothers. He found his love for painting and even building when he used to build forts in the woods behind his childhood home. As a little boy William was very athletic and adventurous. He played basketball, baseball, did gymnastics and in his own words he never sat still. It was at this early age he also found his love for trains, most notably the Delaware and Hudson railway. At 14, William and his family moved to Freeport Bahamas. There William attended and graduated from Catholic High and most importantly met Eleanor. After graduating high school, he quickly joined the Navy in 1972. It was upon returning from basic training that he would marry Eleanor in a small ceremony in Freeport. In the Navy, William would go on to work as a helicopter utility aircrewman, vertical onboard delivery aircrewman and as a rescue aircrewman. William was first stationed in Bermuda, where he and Eleanor would have their first child together, daughter Susan, in 1973. And throughout the years William would prosper in the Navy as well as travel with his young wife and daughter. When stationed in Pensacola, William and his wife had their second daughter Irmgard, in 1982. Two years later, they welcomed their third daughter, Ethelyn while stationed in Key West. There William would earn his ranking as Chief. The family of five would go on to move to Sicily. William would start his love of collecting by acquiring items from the various countries he visited. When the family came state side, they moved to New Orleans in 1990 and William would go on to earn the ranking of Senior Chief. He also started dedicating himself to mastering the craft of woodworking by building custom, one-of-a-kind pieces of furniture for his daughters and home. William was later stationed to Guam for 3 years while his wife and daughters stayed state side residing in Pensacola. In Guam he would scuba dive and collect shells and send home care packages of the items he collected. When William returned home, he spent his free time taking his younger daughters to gem shows, taking them fishing, camping, or just working around in his garage. He also started working on their stamp collections, as well as continuing to engulf himself into the passions he had for trains and collecting. William retired from the Navy on August 31, 1998. He would also go on to welcome 8 grandchildren building each of them their own personal go-cart or 2-wheeler. He enjoyed cooking and having his grandchildren help him in the kitchen. He enjoyed teaching them how to use power tools to take things apart because he did the same with his father. William spent much of his time once he retired with his family, especially his grandkids. He shared as much knowledge as he could with them as he did with his three daughters. William was about hard work, dedication, and having passion for what you believe in. He always said, “if you are early, you are on time, if you are on time, you are late.” He carried that work ethic in every aspect of his life from working in the Navy to building his various collections. Sadly, on February 6th, 2022, William lost his battle with an illness that he bravely fought for over 20 years and passed peacefully in his sleep in the home he shared with his wife for 25 years. His family was by his bedside in the end and upon being taken away by the funeral home his children and grandchildren as well as dear family friends lined up and saluted him as he was wheeled by draped with the American Flag. William was a dedicated Navy sailor and a major figure to his family and to all those who met and knew him, and he will be greatly missed. Visitation will be Tuesday, February 15, 2022, from 10:00 to 11:30 AM, at Faith Chapel Funeral Home South. Funeral Service will follow at 11:30. Chaplain Ken Griffin will be officiating. Interment will be at Barrancas National Cemetery, NAS Pensacola, FL. Faith Chapel Funeral Home South, 100 Beverly Parkway, Pensacola, is entrusted with arrangements. You may express condolences online at www.fcfhs.com.

The family of William Thorpe Ellerby Jr. created this Life Tributes page to make it easy to share your memories.

Today we honor the life and legacy of Retired Navy Senior Chief...

Send flowers to the Ellerby family.