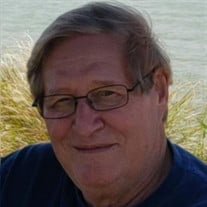 William (Bill) Francis Davey, 78, of Gulf Breeze, FL, peacefully passed away on May 15, 2022, surrounded by loved ones, after recently suffering a stroke. Bill was born on June 15, 1943, to parents Frederick Glenn Davey and Wanda Delores Davey in Detroit, MI. Bill moved to Rogers City, MI at age 6 and spent his childhood summers in Mullett Lake, MI. Bill graduated from Cheboygan High School, earned an undergraduate degree in Mechanical Engineering at the UCLA and a master’s degree at the University of Michigan that fueled his love of the UM vs. OSU rivalry. Bill worked as an Automotive Engineer at Ford and GM in Detroit for over 10 years. Bill was passionate about the industry and was a car enthusiast who loved automotive engineering and design. He then moved to Cleveland, OH, where he was an eclectic entrepreneur creating successful businesses in water treatment, industrial chemistry, computers, and industrial machinery for over 30 years. Bill was a natural community builder. As an active member of the American Wine Society, he chaired the Cleveland Chapter and later co-founded and chaired the Emerald Coast Chapter. He was a member of the Fraternal Order of Eagles in Chagrin Falls, OH and the Elks of Pensacola Beach, FL. His home was a common gathering site, and he was known to neighbors as the glue that holds the community together. Bill retired in 2017 to a lovely beach home on the East Bay in Gulf Breeze, FL that he called paradise. His hobbies were many and varied including DIY projects, wine making, captaining his boat “Definitely” and travel. Bill was predeceased by his parents and siblings (Betty Flick, Louis Davey, Frederick Davey, John Davey, Thomas Davey). He is survived by his beloved wife of 23 years Pamela, and their standard poodles, Syrah and Tina. Bill is survived by his 4 children Matthew Davey (Teresa), Kirsten Aloisantoni (John), Christa Laubach (Steve), Dennis Lackmeyer (Heather); his 5 grandchildren Stacey, Jackie (Jonathon), Angela (Nate), Sabrina, Zoe, and Noah; and his 3 great grandchildren Trae, Jayla, Anjay. Bill also leaves behind the close-knit neighborhood family. A memorial service will be held in June. In lieu of flowers, please consider a donation to the American Wine Society Educational Foundation. Faith Chapel Funeral Home North, 1000 South Highway 29, Cantonment, is entrusted with arrangements. You may express condolences online at www.fcfhs.com.

William (Bill) Francis Davey, 78, of Gulf Breeze, FL, peacefully passed away on May 15, 2022, surrounded by loved ones, after recently suffering a stroke. Bill was born on June 15, 1943, to parents Frederick Glenn Davey and Wanda Delores Davey... View Obituary & Service Information

The family of William Francis Davey created this Life Tributes page to make it easy to share your memories.

Send flowers to the Davey family.