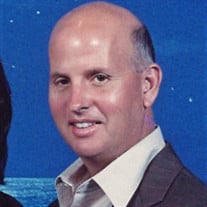 Thomas (Tom) Davis, Jr. passed away at Covenant Care with his loving family by his side on May 30, 2022. Tom fought a long and courageous battle with Myotonic Dystrophy, a cruel disease that limited his activities and eventually took his life. Tom lived a full and active life in Pensacola, where he was born, grew up, and attended local schools. He graduated from Pine Forest High School, attended Pensacola Junior College, and transferred to The University of South Alabama, College of Engineering where he graduated with a BS degree in Civil Engineering. He later earned a Certified General Contractor License. While at USA, his roommate, David Fitzpatrick, introduced Tom to his sister, Beth. It didn’t take long for them to fall in love. Tom and Beth married in 1985, and before long, they became the proud parents of Laura, in 1987, and Andrew, in 1990. Tom and Beth had a beautiful relationship. Tom was a sweet, caring, easy-going husband that would do anything to make Beth happy. Tom started his career as a home builder, but dreamed of having his own business using heavy equipment. In 1989, he and his family formed Davis Marine Construction, Inc. Tom was the president of the company for almost 27 years and played an active role in countless pile driving projects in Northwest Florida and South Alabama. Over the years, Tom, Jr., along with his dad, Tom Davis, and brother, Alex Davis, pursued other ventures as well. They planned and developed several residential subdivisions, including Brookside Hills, Tanglewood Oaks and Willow Tree Acres. Every hunting season, Tom and Andrew enjoyed weekends with his friends at the hunting club where he was the camp chef. They looked forward to his steaming pots of chili, or venison stew. Tom was also the cook at home. He loved to grocery shop, plan and prepare big family meals to invite his parents for dinner. Some claimed his seafood gumbo, turnip greens and cornbread were the best in the South. Most of all, Tom enjoyed spending time with his family. He loved being a father and especially loved to watch his three beautiful granddaughters play. He loved going on big camping trips with all the extended family. Driving his boat and bream fishing were among his many hobbies. As Tom’s health declined, he said he missed cooking and camping with his family the most. No matter the obstacles, he was determined to keep his weekly Thursday lunch tradition with his best friend, David Fitzpatrick. Dave and Tom-Tom enjoyed all their family gatherings together. We will all miss these special times. What the rest of our family will miss most about Tom is everything. We will miss his kindness, generosity, devotion to family, sense of humor, and his presence at all of our family gatherings. Tom made life richer for all of us, and he’s left us with a multitude of priceless memories. Tom is survived by his wife, Beth Fitzpatrick Davis, their two children, Laura (Hunter) Kiker, and Andrew Davis. Also surviving are his three granddaughters, Lila, Maggie and Stella Kiker, his parents, Tom and Sue Davis, his brother, Alex (Margaret) Davis, his brother-in-law, David (Diane) Fitzpatrick, his sister-in-law, Barbara (Gary) Holt and his many other relatives including aunts, uncles, cousins, nieces and nephews. Visitation for Tom will be held on Saturday, June 4, 2022 at 10:00 a.m. with the funeral service following at 11:00 a.m. at Pine Forest United Methodist Church. Pallbearers will be Andrew Davis, Hunter Kiker, David Fitzpatrick, Jr., Alex Davis II, Anthony Burkett, Mark Franklin, Jake Godwin, Michael Vernor, Nathan Corchis. In lieu of flowers, the family requests for donations to be made to the Pine Forest United Methodist Church Children’s Ministries.

Thomas (Tom) Davis, Jr. passed away at Covenant Care with his loving family by his side on May 30, 2022. Tom fought a long and courageous battle with Myotonic Dystrophy, a cruel disease that limited his activities and eventually took his life.... View Obituary & Service Information

The family of Thomas "Tom" Harvey Davis Jr. created this Life Tributes page to make it easy to share your memories.

Thomas (Tom) Davis, Jr. passed away at Covenant Care with his...

Send flowers to the Davis family.