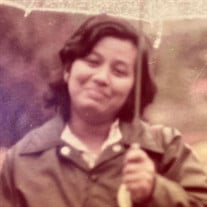 Teresita Armamento Agatep, 72, of Pensacola, Florida passed away to be with the Lord on Tuesday morning, May 10th. Having spent the last 35 years in Pensacola, Teresita (“Tessie”) was born on August 2, 1949 in Lucena City, Philippines. She was one of fourteen children born to Amando Armanento and Emer (Quinto) Armamento. In 1972, Teresita moved to California where she met and married her husband, Victor Agatep. Together, Teresita and Victor built a life and a loving family. They lived many places around the world, including Morocco, Italy, Washington State, and Japan before settling in Florida in 1986. Over the next 20 years, she made many lifelong friends while working at the Corry Station Commissary. Teresita was known as the content and “quiet one” among her siblings, though she had a knack for making whole rooms of people laugh with her timely, witty remarks. She always seemed to be winning—whether it was in Biloxi casinos, bingo, or games of mahjong with her sisters. Teresita was known throughout the community for her unfailing generosity and patience. She loved to cook and bake a variety of foods for her friends and family, including her famous leche flan cake. She was a faithful Catholic and member of the St. Anne Catholic Church. Teresita is preceded in death by her parents as well as her siblings; Conchita, Reynaldo, Ernesto, Alicia, Erlinda, Zenaida, Oscar, and Cesar. She is survived by her husband Victor and her beloved sisters; Lina Goings, Leticia Vibar, and Gloria Villegas. She is also survived by her children; Grace Agatep (Jason Ross), Anthony Agatep (Janette), Albert Agatep (Renée); and her grandchildren; Xavier, AJ, Annalise, Dorothy, and Albert Jeffrey. The visitation will be held at Faith Chapel Funeral Home South, Thursday, May 19th from 5 PM until 7 PM. The funeral mass will take place on Friday, May 20th at 9 AM at St. Anne Catholic Church. The funeral procession will take place following the mass, followed by the burial within NAS Pensacola at Barrancas National Cemetery. Faith Chapel Funeral Home North, 1000 South Highway 29, Cantonment, Florida is entrusted with arrangements. You may express condolences online at www.fcfhs.com.

Teresita Armamento Agatep, 72, of Pensacola, Florida passed away to be with the Lord on Tuesday morning, May 10th. Having spent the last 35 years in Pensacola, Teresita (&#8220;Tessie&#8221;) was born on August 2, 1949 in Lucena City, Philippines.... View Obituary & Service Information

The family of Teresita Agatep created this Life Tributes page to make it easy to share your memories.