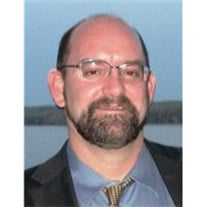 After a courageous battle with ESLD (End Stage Liver Disease), Stuart A. Franklin (Stu) age 56 took his last breath at his home surrounded by his loving family on December 7, 2021. Stuart was born in Omaha, Nebraska and grew up in a military family. Stuart attended Tate high school in Pensacola followed by Pensacola Junior College. In 1983, he joined the Marine Corps. After 4 years in the service, he later studied Information Technology at Leicester in the United Kingdom where he obtained his PhD. For 24 years he worked in the IT field, but what gave him the greatest joy was spending time with his family. Stuart was a very devoted family man with a unique sense of humor. He loved to sing and play piano to his favorite artists Elton John and Billy Joel. In his spare time, Stuart was a true fixer-upper as they would say. Using his high technology skills, he turned his home into a smart home among many other projects. He enjoyed repairing cars, loved history, was an avid traveler, multi lingual, cultured chef at home, and gardening with his wife. He was a very loving, devoted husband and father, and cared so much for animals especially his ESA chicken babies. He is preceded in death by his mother Lenora White, his brother Robert Campbell Jr., and his sister Altonya Bancroft. He is survived by his loving wife of 29 years Melissa A. Franklin and sons, Kaysaun Franklin, Austen Franklin, Samuel Franklin; daughter, Courtney Franklin; daughter-in-law, Jamie Gianino-Franklin; father, Alton C. Franklin, Jr; brothers, Alton C. Franklin III, Guy Franklin; sister, Lenora Scott; and several nieces and nephews. Visitation will be Monday, January 10, 2022 from 10:00 AM to 1:00 PM, at Faith Chapel Funeral Home South. Funeral Services will follow at 1:00 PM. Joe Culbertson will be officiating. Interment will be at Barrancas National Cemetery. The family would like everyone to wear a hint of purple if possible as that was his favorite color. Faith Chapel Funeral Home South, 100 Beverly Parkway, Pensacola, is entrusted with arrangements. You may express condolences online at www.fcfhs.com.

After a courageous battle with ESLD (End Stage Liver Disease), Stuart A. Franklin (Stu) age 56 took his last breath at his home surrounded by his loving family on December 7, 2021. Stuart was born in Omaha, Nebraska and grew up in a military... View Obituary & Service Information

The family of Stuart Allen Franklin created this Life Tributes page to make it easy to share your memories.

After a courageous battle with ESLD (End Stage Liver Disease),...

Send flowers to the Franklin family.