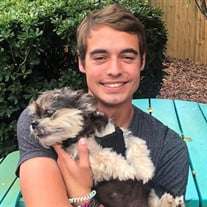 On January 30th, 2022, the world lost a very happy, optimistic, loving person. He leaves behind his twin brother, and all his friends and family who loved him so much. Steven was the person who brought light into this world. He was always so optimistic about everything. He could make everyone smile with his smile. He loved cars, he loved his women, his family, his friends. He had just taken the ASVAB and scored high enough to join Space Force just like he wanted to do. He loved his 2002 black Pontiac TransAm almost as much as he loved his dog, Smelley. He also played the piano beautifully. Steven and his twin brother did everything together. They were inseparable. The bond between twins is unlike any thing else in this world. The relationship he had with all of his siblings and family and friends was closer and deeper than anything. Steven was born July 29th, 1994, in Mobile, Alabama. Steven will forever be loved and missed by his twin brother Kevin Slaby; his sister, Taylor Slaby; his older brother, Ryan Slaby; sister-in-law, Brenna Slaby; his mother, Susan Bentley; father, Mark Slaby; step father, Miles Bentley; step mother, Deana Slaby; his nephews, Aiden and Caleb Slaby; his cousins, Brooke, Ashley, Lyndsey and Hunter Slaby, Matt and Haley Fredrick, Allison Baryki; grandmother, Phyllis Fegley; grandfather, Charlie Fegley; nana Peggy Keiffer; grandpa, Ed Keiffer; mawmaw, Dianna Akins; pawpaw, Gil Akins; Uncle, Mike Slaby; Aunt, Melissa Slaby; Aunt, Kim Holloway; and Uncle, Garry Holloway; Aunt Michelle Huber and Uncle Eric Huber, step brother, Brian Bentley; step sister, Jennifer Daniel; step brothers, Kevin Hurt, Cory Schlautman and Blake Schlautman; and step sister, Britain Stokes. Steven was preceded in death by his close friends and family; Ward Hurt, Win Zeigler, Michael Bozant, Darrick Mcnutt, Cleaveland Fountain; and his Great Grandparents, Adda and Frank Bord, Fern and Claude Miller. Visitation will be at Faith Chapel Funeral Home North on Friday, February 4, 2022 from 9:00 AM to 10:00 AM. The service will follow at 10:00 AM. Chaplain David Gibson will be officiating. Honorary Pallbearers will be Corey Keith, Zach Sciortino, Bradley Moring, Jeremey Martinez, Skyler Parker, Ryan Pacatte, Marshall Audette, Caleb Rhine, Brett Mosley, Blake Hootie Wood In lieu of flowers donations can be made to K9s for Warriors.

On January 30th, 2022, the world lost a very happy, optimistic, loving person. He leaves behind his twin brother, and all his friends and family who loved him so much. Steven was the person who brought light into this world. He was always... View Obituary & Service Information

The family of Steven Matthew Slaby created this Life Tributes page to make it easy to share your memories.

Send flowers to the Slaby family.