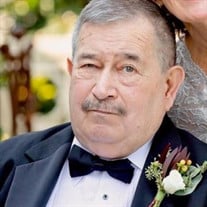 Sheldon Colbert was born June 30, 1950, and went to heaven April 19, 2022. Sheldon, or Pop, as he was so affectionately called was a loving husband, father, grandfather, and friend to so many. His grandchildren were the apple of his eye. Sheldon was born in Megargel Alabama, and moved to Pensacola shortly after. He was a proud tribal member of the Poarch Band of Creek Indians. He graduated from Woodham High School and soon after graduation he joined the United States Marine Corps, where he proudly served his country in the Vietnam War as a Combat Engineer. Sheldon retired from the Naval Aviation Rework Facility (NADEP). He was a man that rarely sat still, and those who knew him knew that he could fix anything. He could be found most nights helping at the family business, The Cake Shop, in Pensacola. His favorite getaway was spending time with his family in the Great Smokey Mountains. He was a fine family man and his top priority was being their provider. Sheldon was preceded in death by his parents, Leon and Kathryn Colbert. He is survived by his loving wife, Kaye, of 50 years, brothers Leon, Jr. (Sandra) and Keith (Regina), two daughters, Christi Schiffer (Brent) and Jennifer Rogers (Nicholas); his grandchildren, Whitney Brown, Jordan Brown, Savannah Schiffer, Emilia Schiffer, and many nieces, nephews, and friends. The family would like to express their thanks to Covenant Hospice and, especially, Aimee Brown, for the outstanding care. Visitation will be held at Faith Chapel North, 1000 S Hwy 29, from 6-8 p.m. on Thursday, April 21st. Sheldon will be laid to rest at Barrancas National Cemetery at 10:00 a.m., April 22, 2022. Everyone attending the graveside should be at Faith Chapel South, 100 Beverly Pkwy, by 9:00 a.m. Due to base security, you must be in the procession to attend the graveside service.

Sheldon Colbert was born June 30, 1950, and went to heaven April 19, 2022. Sheldon, or Pop, as he was so affectionately called was a loving husband, father, grandfather, and friend to so many. His grandchildren were the apple of his eye. Sheldon... View Obituary & Service Information

The family of Sheldon Colbert created this Life Tributes page to make it easy to share your memories.

Send flowers to the Colbert family.