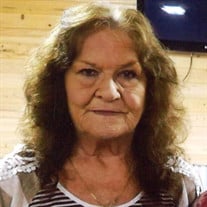 Sandra Diane “Sandy” Stafford passed away Thursday, December 23, 2021, in Pensacola, FL. She was born June 16, 1951, in Pensacola, FL. Sandy was one of six siblings, who had a less than fortunate childhood. She married at the very young age of 14 and became a mother at the age of 15. This was her true calling. She was very loving, caring, unselfish, a provider and protector. Sandy was an Escambia County School Bus Driver for over 30 years. During this chapter of her life, she became attached to so many of her children. She has bought clothes, shoes, toys and food. Also during this time she has made many lifelong friends. In 1983, she met and married the love of her life, Bill. He was the missing piece to her family. After retirement in 2004, she loved spending time with her family, especially the grandchildren and great grandchildren. She also loved swimming, camping, gambling and watching wrestling. Sandy is preceded in death by her husband, Bill Stafford; daughter, Kathy Lynn Sorrells; son, Timmy Sorrells; parents, Billie and Juanita Brown; brothers, Billy and Roger Brown; and best friend, Betty Coleman. Sandy is survived by her daughter, Angie (Jimmy) Coleman; daughter, Anita Cox (Jerry); brother, Mike (Cindy) Brown; sister, Carolyn (David) Morgan; sister, Darlene (Al) Nichols; grandchildren, Brittany, Brianna, Cheyenne, Jonathon, Jake; and great grandchildren, Ryan, Riley, Jaxson, Odessa, Skylar, Addison and Aaliyah. Visitation will be Wednesday, December 29, 2021, from 6:00 to 8:00 PM, at Faith Chapel Funeral Home South. Funeral Service will be Thursday, December 30, 2021, at 12:30 PM. Interment will follow at Eastern Gate Memorial Gardens. Pallbearers will be Kenny Hart, Jerry Cox, David Sorrells, Darrin Smith, Robert Phillips and Paul Wrinkle. Sandy will forever be missed and loved! Because of her, we are the mothers we are today! Faith Chapel Funeral Home South, 100 Beverly Parkway, Pensacola, is entrusted with arrangements. You may express condolences online at www.fcfhs.com. Sent from Mail for Windows

The family of Sandra Diane Stafford created this Life Tributes page to make it easy to share your memories.

Send flowers to the Stafford family.