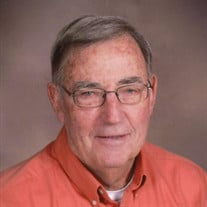 Samuel Dutson Furr passed away at his home on January 11,2022 at the age of 84. He was born to the late Jack O. Furr and Brooks B. Furr in Petrey, Alabama on January 15, 1937. Sam graduated from Luverne High School in 1955 and immediately enlisted in the US Navy. He attended boot camp in San Diego, California. After boot camp he was stationed to NAS Miramar. While in annual leave in 1956, Sam met the love of his life Gail. They married in 1957 and moved to El Centro, California. He was then transferred to NAS North Island in San Diego. While at NAS North Island, he was sent on a far east tour aboard the aircraft carrier, USS Lexington. He had stops in Hawaii, Guam, Okinawa, Philippines, and Japan. During his tour, he and his crewmates were involved in the “squabble” between China and Taiwan over the Quemoy Islands. Sam left the US Navy after 4 years returning to Alabama and working with his father as a brick layer for a few months then started a civilian job at Ft. Rucker working on LO-19 training aircraft for a couple months before re-enlisting in the US Navy. After re-enlisting, he was stationed to NAS Patuxent River. Sam and Gail spent a little over 5 years in Maryland and then got transferred to Barbers Point, Hawaii and spent 3 years there. His next station was Whidbey Island and was barely able to settle his family before his squadron (VP-42) was sent to Cam Ranh Bay, Vietnam. After spending 6 months traveling between Viet Nam and Sangley Point, Phillipines, he returned back to Whidbey Island to his family. His final military station was NAS Ellyson Field in Pensacola. The entire squadron (HT-18) was then sent to NAS Whiting when Ellyson Field as shut down. Sam retired from the US Navy as a Chief Petty Officer after serving 20 years in 1974. After spending some time in retirement, Sam decided he wanted to continue working and enrolled in Pensacola Junior College under the GI bill and received his Associate of Arts in 1985 in both electricity and HVAC. After receiving his degrees, he was hired as the Supervisor with Area Housing Commission for 13 years before his second retirement. After his second retirement he took a part time position at Holiday Inn at University Mall and was talked into becoming the maintenance supervisor and spending 5 years before retiring his third and final time. Sam is preceded in death by his parents and one son, Gregory Wayne Furr. Sam is survived by his wife Abigail (Gail) Blackmon Furr; two son’s Samuel Thomas (Shannon) Furr and Michael Anthony (Lynn) Furr; three grandsons Jason Caswell (Chelsea) Boatwright, Zachary Ryan (Jessie) Furr, and Anthony Wayne Furr; three great granddaughters Lucy Gail Boatwright, Lorelei Kelly Boatwright and Laiken Michelle Boatwright; and two great grandsons Kayden Jace Boatwright and Austin Thomas Boatwright. Service Information Faith Chapel Funeral Home North, 1000 South Highway 29, Cantonment is entrusted with arrangements. You may express condolences online at www.fcfhs.com.

Samuel Dutson Furr passed away at his home on January 11,2022 at the age of 84. He was born to the late Jack O. Furr and Brooks B. Furr in Petrey, Alabama on January 15, 1937. Sam graduated from Luverne High School in 1955 and immediately enlisted... View Obituary & Service Information

The family of Samuel Dutson Furr created this Life Tributes page to make it easy to share your memories.