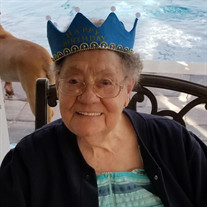 Ruth Elmyra (Denham) Ard, 94, entered the joys of heaven on Wednesday, December 29, 2021 leaving the sorrows of this world far behind. Ruth was born on January 9, 1927 to Ollie and Virginia Denham in Robertsdale, Alabama. She was a waitress for many, many years at various restaurants in Pensacola, Florida. She finally retired after 24 years from the Coffee Cup Restaurant in 2001 at the age of 74. She was a faithful member of the Pensacola Baptist Temple for many years and was responsible for bringing and introducing several of her co-workers to the Lord. Upon moving to Texas to be with family, she became a faithful member of the Cornerstone Baptist Church in Missouri City, Texas. When she was no longer able to attend church services, she remained a faithful prayer warrior until the day she went to heaven. Ruth was preceded in death by her parents, Ollie and Virginia Denham, her brothers, Orien Denham and Carl "Blue" Denham and her infant son. She is survived by her sons, Winfield Larry Warner, III of St. Augustine, FL, Lloyd Quitman Ard and his wife, Denise, of Seabrook, Texas and Ollie Lamar Ard and his wife, Tanya, of Missouri City, Texas; 9 grandchildren; 6 great-grandchildren, numerous nieces and nephews and a host of friends. Ruth was well loved and will be greatly missed by many. Funeral services will be held at 10:00 AM on Wednesday, January 5, 2022 at Faith Chapel Funeral Home in Cantonment, Florida. Visitation will begin at 9:00 AM until the service. Internment will follow at the Clear Springs Cemetery in Robertsdale, Alabama. The service will be officiated by Rev. Bill Stewart and Rev. Kenneth Ralph.

Ruth Elmyra (Denham) Ard, 94, entered the joys of heaven on Wednesday, December 29, 2021 leaving the sorrows of this world far behind. Ruth was born on January 9, 1927 to Ollie and Virginia Denham in Robertsdale, Alabama. She was a waitress... View Obituary & Service Information

The family of Ruth Elymra Denham Ard created this Life Tributes page to make it easy to share your memories.

Send flowers to the Ard family.