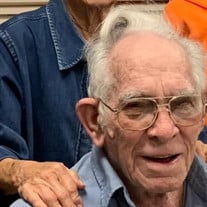 Russell Lee Canedy went to be with the Lord on Tuesday, January 4, 2022. For those who knew him well, and amongst his family he was always known as Lee. He was born on January 16, 1933, in Greenfield, MA to Andrew and Gertrude Canedy. He was married to his best friend, Joy, for 68 years. He was a devoted husband, father, grandfather, and great-grandfather. Lee was talented in working with his hands from a very early age. He began repairing bicycles before he used his skills in auto repair. He enjoyed learning how things worked and was able to fix anything mechanical. He also loved woodworking. He built and created many things that he designed himself, as well as building the last home he and Joy lived in. He loved reading, especially history and the subject of Biblical creation. As a young person he learned to play the saxophone and honed his musical skills to become a talented musician. Early on he played in a dance band on weekends. Later he used his musical ability to play in church. After retirement he was in a trio of musicians that played for retirement homes and other events by invitation. Lee was also an Army veteran. He was drafted into the Army during the Korean War. He and Joy spent some years in Germany where they were both introduced to the Gospel of Jesus Christ. Lee professed his faith in Jesus as a result of the witness of two precious Christian friends he met in the Army, with whom he was friends for the rest of his life. He was ready and willing at any time to help others in need. He was a wonderful friend to many people during the course of his life. Lee leaves a legacy of a hard work ethic, love for his family, and devotion to the Lord Jesus Christ. He is preceded by his wife Joyce Canedy, father Andrew Canedy and mother Gertrude Canedy. He is survived by two daughters, Becky Clark, Beth Rice (Andy), a sister, Elizabeth Brothers, five grandchildren, Crystal Craven (Andrew), Heather Collins (Lewis), Daniel Clark (Emly), A.J. Rice (Nicole), and Jonathan Rice (Erin), as well as 16 great-grandchildren. Pallbearers: AJ Rice Daniel Clark Jonathan Rice Andy Craven Lewis Collins Darrin Brothers

Russell Lee Canedy went to be with the Lord on Tuesday, January 4, 2022. For those who knew him well, and amongst his family he was always known as Lee. He was born on January 16, 1933, in Greenfield, MA to Andrew and Gertrude Canedy. He was... View Obituary & Service Information

The family of Russell Lee Canedy created this Life Tributes page to make it easy to share your memories.

Russell Lee Canedy went to be with the Lord on Tuesday, January...