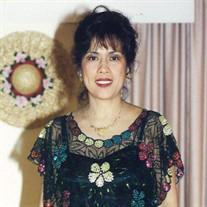 Rosalinda Manasan Torio age 70, died on Sunday, December 19, 2021, in the loving house of her daughter Cristilyn Solis, in Pace, Florida. She was surrounded by her husband, Romeo, youngest daughter, Jaycelyn and her family, aunt, her siblings, and their spouses. Rosalinda Viray Manasan was born on July 19, 1951, in Masantol, Philippines. She was the 5th oldest out of 14, born to Angelo Manasan and Dorothy Viray Manasan. She moved to Portsmouth, Virginia, in August, 1973, with her brother Rolando and became an Apprentice Hairdresser. She later met and married Romeo B. Torio on April 22, 1975. They had 3 children, Cristilyn, Ronnie and Jaycelyn and settled in Pensacola, Florida. Rosalinda wanted to advance her hairdressing career so she continued her education at George Stone Technical College to get her license in Cosmetology. While at school, she competed in two competitions. Her first competition was in Florida, where she won first place, the gold medal! Therefore, the school sent her to Arizona to compete on the national level and she took fourth place at that competition. Although she didn’t win the top 3, she was recruited to go to Australia to train with many top hairdressers. However, she chose to return back to Florida to be with her family. She got her license as a cosmetologist and later opened her own salon, Exquisite Hairstyles, in 1989. As a devoted Christ follower, she became a parishioner at Little Flower Catholic Church. And eventually joined the Sunday Charismatic Prayer Group. She centered her life around using her love of singing to serve God. Therefore, as a parishioner at Little Flower Catholic Church for many years, she eventually joined the choir and sang on both the Saturday and Sunday masses. She was also the lead singer for first Saturday masses at various churches, as well as, the lead singer during Christmas caroling with the Sunday Charismatic Prayer Group. At a very young age, she loved music and singing. She was a talented singer, writer, and composer. While a teenager in the Philippines, she competed in a competition called Tawag ng Tanghalan and became a champion. She also sang on a television show called Darigold Jamboree in the Philippines. In her adult years, she auditioned for and was selected to become a member of the renowned Choral Society of Pensacola. As a member of the group, she had the fortunate opportunity to compete in a singing competition in Beijing, China. In order to improve her music career, as an adult, she took lessons in voice, as well as, taking piano lessons to fulfill her lifelong dream of becoming a pianist. Rosalinda is mostly known for her love of family and friends, her beautiful singing voice, her amazing talent as a hairstylist, her compassion for others, her giving heart, her infectious smile and laughter, and especially her love for Jesus Christ. The memorial will be held at Faith Chapel Funeral Home and Crematory, 100 Beverly Parkway, Pensacola, Florida on Wednesday, January 5, 2022, at 4:00-5:00pm for the family and 5:00-7:00p.m for friends. Rosary will be recited at 5:00 PM by Deacon Rey Castellano. Mass service will be held at Little Flower Catholic Church on Thursday, January 6, 2022, at 9:30 a.m. and burial will be in Barrancas National Cemetery following the mass. Reverend Father Matthew Worthen will be Celebrant. Reception will be at Little Flower Catholic Church following the burial. She is preceded in death by: Angelo Manasan, father; Dorothy Manasan, mother; Reynaldo Manasan, brother; Danilo Manasan, brother; and Victor Manasan, brother. Survivors: Romeo B. Torio, husband; Cristilyn Solis, daughter; Dennis Solis, son-in-law; Raylene Solis, granddaughter; Risalyn Solis, granddaughter; Caden Solis, grandson; Tristen Solis, grandson; Ean Solis, grandson; Adelyn Solis, granddaughter; Ronnie Torio, son; Megan Torio, daughter-in-law; Syiah Torio, granddaughter; Jaycelyn Santiago, daughter; Rodrigo Santiago, son-in-law; Kalina Santiago, granddaughter; Jadelyn Santiago, granddaughter; Angellina Santiago, granddaughter; Wilfredo Manasan, brother; Flordeliza Macalino, sister; Eloisa Ignacio, sister; Rolando Manasan, brother; Angelo Manasan Jr., brother; Arlene Ronquillo, sister; Marie Tess Maglanoc, sister; Rizaldy Manasan, brother; Arthur Manasan, brother; and Lilibeth Salazar, sister. Pallbearers will be Dennis Solis, Rodrigo Santiago, Caden Solis, Tristen Solis, Ean Solis and Fred Deang. Faith Chapel Funeral Home South, 100 Beverly Parkway, Pensacola, is entrusted with arrangements. You may express condolences online at www.fcfhs.com.

Rosalinda Manasan Torio age 70, died on Sunday, December 19, 2021, in the loving house of her daughter Cristilyn Solis, in Pace, Florida. She was surrounded by her husband, Romeo, youngest daughter, Jaycelyn and her family, aunt, her siblings,... View Obituary & Service Information

The family of Rosalinda Manasan Torio created this Life Tributes page to make it easy to share your memories.

Send flowers to the Torio family.