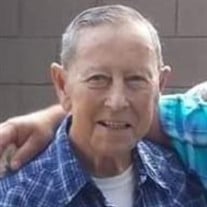 Robert Otis Land, 85, of Pensacola, Florida, passed away on Saturday, June 18, 2022. Funeral services will be held at Faith Chapel Funeral Home South in Pensacola, Florida, June, 24, 2022 at 10 AM. Visitations will be held at 9 AM to 10 AM preceding the service. Robert will be laid to rest at Roselawn Cemetery in Gulf Breeze, Florida. Robert served in the United States Army. He was Merchant Marine working on tug boats in the Gulf of Mexico. He later worked supply and logistics for the civil service. He was a member of the Escambia Lodge 15 of Free and Accepted Masons where he was a Scottish Rite 32nd degree Mason. Robert enjoyed mullet fishing and was well known for frying the best mullet in town. Robert was an avid racecar enthusiast having spent his younger days racing. In later years he enjoyed spending his mornings with his friends at the American Legion. He is preceded in death by his father and mother, Robert and Beatrice Land, his first wife, Lorrain Land, second wife, Marty Land, his siblings, David, Elsie, Ralph, and Fred Land. He is survived by his nephews, Bobby Land and wife Mary, Alan Land and wife Karen, Joel Land and wife Tiffany, his niece, Lisa Schlobohm and husband Mark, and many great nephews and nieces. Pallbearers will be Bobby Land, Matt Land, Jason Land, Joel Land, Mark Scholobohm, and Asa Schlobohm. Honorary pallbearers will be the American Legion Post.

The family of Robert Otis Land created this Life Tributes page to make it easy to share your memories.

Robert Otis Land, 85, of Pensacola, Florida, passed away on Saturday,...

Send flowers to the Land family.