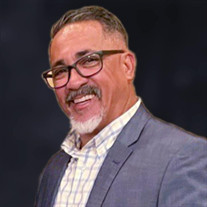 Robert Wayne Cochran passed from this world on December 29th, 2021. He was a faithful husband and “The World's Greatest Dad!” Robert was born in Pensacola, FL on August 3, 1967, to his late mother, Rosalita Walkup, and father, Paul Cochran. Due to his parents’ ties to the Navy, Robert had also lived in Okinawa Japan and Corpus Christi, Texas. Robert always referred to Corpus as his hometown. He attended Flower Buff high school and stayed connected with many of his classmates throughout his life. After high school, Robert traveled through the West Coast and lived in Sacramento, Ca with his sister, Cheryl. Sometime later, he returned to Corpus where he met Ronnie “Diamond” Deleon who introduced him to the world of kickboxing. While being mentored and trained by Deleon, Robert competed under the Diamond Kickboxing Club banner and was befriended by members of the group. Robert “The Texas Heat” Cochran went on to compile a 10-2 record in kickboxing! Known for his bravado and his “never give up” attitude, he was loved and adored by teammates and fans alike. He later left Corpus to meet with his sister Lucy in Milton, FL, who led him to his faith in Christ. Robert met his wife Maria shortly afterward in Pensacola, FL. Robert and Maria were married and had 3 beautiful children; Nicholas, Jacob, and Lauren. He was an active participant in his children's lives, which is also where he gained great friendships and became involved in many community activities. Some of Robert’s many notable achievements include: member of the World Karate Association, member of the Southeaster Wrestling Community, Professional Kickboxer under Ronnie Deleon, Regional Sales Manager for S&D Coffee, District Sales Manager for Pepperidge Farm, and recently, a new position with Lipari Foods as a sales representative. Robert was active in church at both Olive Baptist and Marcus Pointe. Robert is preceded in death by his loving mother, Rosalita Walkup. He is survived by his beloved wife of 25 years, Maria and his 3 children, Nicholas, Jacob, and Lauren, as well as his 4 siblings, Lucy, Paul, Cheryl, and Gloria; his father, Paul Cochran, Sr. Pallbearers will be Nicholas Cochran, Jacob Cochran, Paul Cochran, Jr, John Gambold, Roger Dumagan, Dennis Salon, Richard Perez, Dan Le Pore, Kenneth Payne and TJ Nelson Faith Chapel Funeral Home South, 100 Beverly Parkway, Pensacola, is entrusted with arrangements. You may express condolences online at www.fcfhs.com.

Robert Wayne Cochran passed from this world on December 29th, 2021. He was a faithful husband and &#8220;The World's Greatest Dad!&#8221; Robert was born in Pensacola, FL on August 3, 1967, to his late mother, Rosalita Walkup, and father, Paul... View Obituary & Service Information

The family of Robert Wayne Cochran created this Life Tributes page to make it easy to share your memories.

Robert Wayne Cochran passed from this world on December 29th,...

Send flowers to the Cochran family.