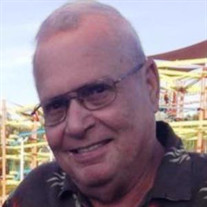 Richard E. “Rick” Starnes, devoted husband and father, peacefully passed on Tuesday, June 7, 2022, at the age of 72. Rick was preceded in death by his dad, James; mom, Ericka, and his dog, April. He is survived by his wife of 52 years, Sherry; three daughters, Susan, Sonya and Delia; seven grandchildren; four great grandchildren; one brother, Wayne; two sisters, Carol and Karen; several cousins, nieces, nephews and a kennel full of great granddogs. Last but not least, a great grandcat. Rick grew up in Charlotte, NC. His childhood was filled with scouts, serving as an Alter Boy for Redeemer Lutheran, the official bat boy for the Charlotte Hornets, and he managed a paper route. After graduating from Harding High, Rick joined the U.S. Navy in 1969. He served his country for 25 years. He retired to Pensacola, FL, and continued working for 10 years as an Aviation Electronics Instructor. Following his second retirement, his days were filled with endless hours on his “Lanai” soaking up the sun and putting together the ultimate team for Fantasy Sports. He was a master griller, lover of an iced cold beer and a close friend of “Jim Beam”. A day was never complete without a quick scroll through the local arrest reports. Rick was loved beyond measure and will be missed always. He lived his life sacrificing for all those he loved. His life was an example of greatness, fairness, and generosity to all who knew him. The family will receive friends from 3:00 to 4:00 PM on Friday, June 10, 2022, at Faith Chapel Funeral Home South. Funeral Service will follow at 4:00 PM. Faith Chapel Funeral Home South, 100 Beverly Parkway, Pensacola, is entrusted with arrangements. You may express condolences online at www.fcfhs.com.

The family of Richard Edwin "Rick" Starnes created this Life Tributes page to make it easy to share your memories.

Send flowers to the Starnes family.