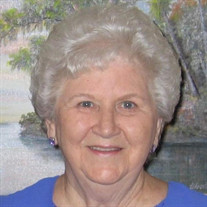 I Peter 4:8-11: “And above all things have fervent love for one another, for ‘love will cover a multitude of sins.’ Be hospitable to one another without grumbling. As each one has received a gift, minister it to one another, as good stewards of the manifold grace of God. If anyone speaks, let him speak as the oracles of God. If anyone ministers, let him do it as with the ability which God supplies, that in all things God may be glorified through Jesus Christ, to whom belong the glory and the dominion forever and ever. Amen.” Patsy Ann Gates Kuhar, 85 years old, of Clarks Summit, PA, formerly of Pensacola, FL, went to be with her Savior on Wednesday, January 26, 2022. Patsy is preceded in death by her husband Edward Kuhar, Sr., her nine sisters: Helen Morris, Sue Nelson, Virgie Roselli, Iona Quattrone, Jean Ayers, Katie Bohanick, Faye Rueff, Dixie Welch and Sylvia Enfinger, and her brother Ronald Gates. She is survived by her three children: her son Pastor Edward Kuhar of Lexington, NC, his wife Patti, and their children; daughter Jennifer (and Larry) Kirby and family, son Glenn (and Mary), and daughter Kaitlynn; her son Kenneth Kuhar of Millersville, PA, his wife Lynda, and their children: daughter Melissa, daughter Kelsey and fiancé Guillermo Florez, and son Adam; and her daughter Elizabeth Welman of Clarks Summit, PA, her husband Chris Welman and their son Zachary. She is also survived by her brother M.J. “Bud” Gates and his wife Priscilla, brother-in-law Charles Ayers, brother-in-law James Rueff, brother-in-law Frank Patti, and sister-in-law Loretta Gates. Patsy was born and raised in Ferry Pass, Pensacola, Florida. She met her late husband, Ed, in New Jersey and they raised their children there. While in NJ, she came to know Jesus Christ as her Savior. She and Ed spent many years serving the Lord at the First Baptist Church of Medford, NJ. Her greatest joy was welcoming family and friends into her home and cooking and baking for them. She loved to travel and had many adventures with her 9 sisters! She was the impetus for the creation of the “Ten Sisters Cookbook.” Patsy was known for her organizational skills, her sense of humor and spunkiness, cooking and baking, caring for children (especially her grandchildren), flower arranging, and gardening. She worked many jobs, from waitressing to flower arranging. All who knew her were blessed by her desire to serve others. She will be greatly missed by all who knew her. We know that Patsy is with her Lord and Savior, so we rejoice in that assurance. Services will be held on Friday, February 4, at the Faith Chapel Funeral Home and Crematory (100 Beverly Parkway, Pensacola, FL). Visitation will be at 10 a.m. and the service at 11 a.m. Graveside service will be at 12-12:30 p.m. at Whitmire Cemetery (Ferry Pass, FL). The internment will be followed by a lunch at the Fraternal Order of Eagles 1-4 p.m. (105 Kenmore Road, Pensacola, FL). All friends and family are welcome to attend the luncheon. Dr. Edward Kuhar will officiate both services. In lieu of flowers, please send honorary contributions to Grace Baptist Bible College (P.O. Box 30127, Winston Salem, NC, 27130). Patsy and Edward were founding supporters of GBBC. Pallbearers: Kenneth Kuhar, Adam Kuhar, Glenn Kuhar, Chris Welman, Ron Bohanick, Charlie Ayers, Frankie Patti, William Little. Honorary Pallbearers: M.J. “Bud” Gates, Charles Ayers, Frank Patti Sr., Benjamin Bohanick, Tony Tarnock, Rodger Enfinger. Faith Chapel Funeral Home South, 100 Beverly Parkway, is entrusted with arrangements. You may express condolences online at www.fcfhs.com.

I Peter 4:8-11: &#8220;And above all things have fervent love for one another, for &#8216;love will cover a multitude of sins.&#8217; Be hospitable to one another without grumbling. As each one has received a gift, minister it to one another,... View Obituary & Service Information

The family of Patsy Ann (Gates) Kuhar created this Life Tributes page to make it easy to share your memories.

Send flowers to the Kuhar family.