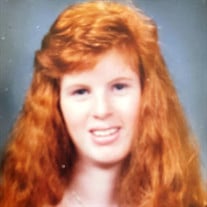 Michele Ward Wilson Michele was called home by our Lord and Savior Jesus Christ on February 22, 2022. Michele was born on February 3, 1973, at the Dwight D. Eisenhower Medical Center, Fort Gordon, Georgia. Her father was in the US Army, so she got to live in several different states and two foreign countries. After leaving Germany and after a few years in Pensacola and Alabama, the family moved to Pace, where she attended Pace Middle School and graduated from Pace High School in 1991. She attended Pensacola Junior College until she moved with the family to Texas in 1995. She later returned to Pensacola to be married. Years later she moved to Ft Walton, and several years later she moved to Lockhart, Alabama. In 2021, she wanted to be near her family and moved back to Florida. Michele really enjoyed the beach, amusement parks, reading books, and absolutely loved animals. She also enjoyed hanging out with family and friends, going on vacation, and playing games. Michele was loved by her family, and friends. Michele never met a stranger and could make friends with anyone. Michele is survived by her father, William M, {Mike} Ward; mother, Brenda McCluskey Ward; sister, Meredith Ward Sundbye and husband Rob Sundbye; nephews, Robby and Nicolas Sundbye; and numerous aunts, uncles and cousins. Michele is preceded in death by her grandparents, William D. and Eleanor Ward; grandparents, David P and Dorothy McCluskey; aunt, Carol McCluskey Vandyke and husband Michael Vandyke; uncle, David McCluskey; uncle, Randy Rose; and uncle, Douglas Ward. Visitation will be Saturday, March 5, 2022, from 10:00 to 11:00 AM, at Faith Chapel Funeral Home South. A Graveside Service will follow at 12:30 PM at Cora Baptist Church Cemetery, Jay, FL. Chaplain David Gibson will be officiating. In lieu of flowers donations to the animal rescue listed below: Animal Rescue A Hope Inc 5755 Washington St Milton, FL 32570 A shelter or no kill facility in your area.

Michele Ward Wilson Michele was called home by our Lord and Savior Jesus Christ on February 22, 2022. Michele was born on February 3, 1973, at the Dwight D. Eisenhower Medical Center, Fort Gordon, Georgia. Her father was in the US Army, so... View Obituary & Service Information

The family of Michele Denise Wilson created this Life Tributes page to make it easy to share your memories.

Michele was called home by our Lord and...

Send flowers to the Wilson family.