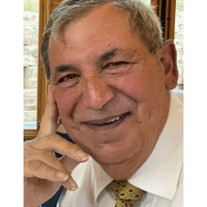 Michael Jeffrey Curci, 70, of Pensacola, Florida, passed away Monday, December 6, 2021. He will be sorely missed by many. Mike was a friend to everyone he met. He lifted the spirits of those around him. Michael was born in Pennsylvania to Michael Peter and Emily (Buckland) Curci. He was the middle child of the five very close Curci siblings. Mike's family was central to Mike, and he kept in constant communication. Michael graduated from Monsignor Bonner high school in 1969. He enjoyed success on the field playing varsity football and in the field houses playing base in the popular dance band, the Marijuana Brass. He graduated from Drexel University with a degree in Business while fulfilling the ROTC program. Michael later obtained his Master's Degree in Computer Sciences from Central Texas College. Michael entered the army as an officer serving active duty both home and abroad. He achieved Jump Master with the 82nd Airborne, of which he was most proud. After his career in the service, Michael continued his association with the military directing IT, communications, and other services through national contractors and universities. Through this work, Michael met the love of his life, his wife of 15 years, Suzanne (Sue) Ham. Michael was not all work. He pursued boating, scuba diving and instructing, photography, motorcycles, music, and woodworking. Mike knew how to laugh and have a good time. After his retirement, Michael moved with Sue to Florida. He continued his passion for boating, volunteering with the local power squadron, America's Boating Club, teaching classes, and conducting countless boating safety checks. Michael made enduring friends from Pennsylvania, where he grew up to Texas, lived and worked for many years, and Florida, where he retired. Mike was a people person Michael is survived by his wife, Suzanne (Sue) Ham and his brothers Thomas Curci and his wife Jenny, Robert Curci and his wife Joanie Weiss, his sister Kathleen (Curci) Gatens, his nephew Lucas Curci and his wife Kelly and their daughter Hope, and his niece Emily (Curci) Amos and her husband, Sean. His stepsons, Dillon Zwick, Austin Zwick, wife Maria Pontikis, granddaughters Anthea and Emmy, stepdaughter Bethany (Zwick) Brotman, and her husband, Aaron Brotman, and granddaughters Hannah and Daphne. Michael was preceded in death by his parents and his sister, Ann (Curci) Test. Services will be held on Saturday, December 11, 2021, at 1:00 P.M. at: Holy Spirit Catholic Church 10650 Gulf Beach Hwy Pensacola, FL 32507 Following services, a reception will be held at the Curci home: 1555 Sandcliff Drive, Pensacola, FL 32507 Instead of flowers, please send donations in Michael's name American Lung Association at lung.org and The Gary Sinise Foundation. Faith Chapel Funeral Home South, 100 Beverly Parkway, Pensacola, is entrusted with arrangements. You may express condolences online at www.fchfs.com.

Michael Jeffrey Curci, 70, of Pensacola, Florida, passed away Monday, December 6, 2021. He will be sorely missed by many. Mike was a friend to everyone he met. He lifted the spirits of those around him. Michael was born in Pennsylvania to... View Obituary & Service Information

The family of Michael Jeffery Curci created this Life Tributes page to make it easy to share your memories.

Send flowers to the Curci family.