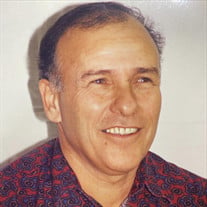 Michael Thomas (Tommy) Cravatt, Sr, 78, of Pensacola, Florida, went to be with the Lord on May 27, 2022, while being cared for in Lillian, AL. Michael was born September 25, 1943 in Big Pine Key (he was the first registered birth in Big Pine Key). He had 8 siblings and grew up in the Pensacola area. He served his country in the U.S. Marine Corp through the Vietnam era. He worked as an instrument technician at International Paper until retirement in 2005. He traveled abroad for work and for missions. He especially enjoyed the trip he took in his later years to Israel and exploring the holy land. He was a problem solver and inventor and had many pattens and inventions. He loved the Lord and prided himself on reading from God’s word every day. He enjoyed his property in Molino, FL for much of the later years of his life. Michael had 11 children, all of whom he is survived by. Jack Eugene Cravatt, Tanya Lynn Stanley, Michael Paul Cravatt, Debra Anna Lee, Michael Thomas Cravatt, Michael Jeremy Timothy Cravatt, Almalee Caroline Perez, Rebekah Grace Rivera, Michael Joseph Cravatt, Sarah Sea Cravatt & Laura Elizabeth Manis. Also survived by countless grandchildren, great grandchildren, nieces and nephews. He is also survived by sisters Miriam (Mickey) Hassell, Patricia Hardy, Marguerite Cravatt, and brother Sam Cravatt. He was proceeded in death by his father, Michael Vincent Cravatt and mother Caroline A. Cravatt and brothers Michael Charles Cravatt (Chuck), Michael Vincent Cravatt, Michael Tavarc Cravatt (Chip) and Michael Richard Cravatt and great grandson Casey Cabler. The family would also like to express a deep appreciation to Lizza Gaye Murphy for the compassionate care that she provided to the very end.” Visitation will be Wednesday, June 1, 2022, from 11:30 AM to 12:30 PM at Faith Chapel Funeral Home South. Funeral Service will follow at 12:30 PM. Interment will be at Barrancas National Cemetery, NAS Pensacola, FL.

Michael Thomas (Tommy) Cravatt, Sr, 78, of Pensacola, Florida, went to be with the Lord on May 27, 2022, while being cared for in Lillian, AL. Michael was born September 25, 1943 in Big Pine Key (he was the first registered birth in Big Pine... View Obituary & Service Information

The family of Michael Thomas Cravatt created this Life Tributes page to make it easy to share your memories.

Send flowers to the Cravatt family.