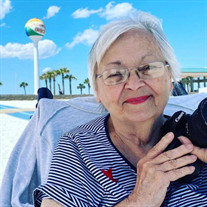 On January 19, 2022, Marylin Jean Funchess passed away peacefully in her home at the age of 84. Marylin’s greatest loves were her family and her faith. She had the most compassionate of spirits and sought out every opportunity to share kindness and her love for Jesus with others. She possessed an innate ability to recognize those who were hurting the most and provide comfort through a listening ear and her grandmotherly love. She was free-spirited and creative, expressing herself through writing, drawing, painting, and photography. Marylin’s life began on May 13, 1937, in Findlay, Ohio with her parents Dale and Ella Fundum. Even in her small town, her childhood was full of adventures and wonderful experiences with her younger brother, Dale Jr., and her many cousins. Marylin was married to Duane Farthing in 1956. They made their home in McComb, Ohio and welcomed two healthy children into the world together. In 1962, Marylin gave birth to her third child, Robbie Joe, who was born into the arms of Jesus. It was through this heartbreak that Marylin began her journey of faith. In 1966 God showed his faithfulness to the Farthing family through the birth of a healthy baby girl. Over the next seven years, Marylin settled into normal life; football and baseball games, swimming and art lessons, and teaching Sunday School. In 1973 tragedy struck the Farthing family when Duane passed after a very brief battle with cancer. As a newly widowed mother of three Marylin wrote “I feel so inadequate for the task ahead, but I know that God will be with me.” God had a plan for Marylin and proved His faithfulness through her marriage to David Smith. She would always say that David was her soulmate and the love of her life. They were blessed with a baby girl a year after their marriage and they eventually made their way South to Pensacola, Florida. David was ordained in the United Methodist Church some years later and together…always together…they preached the gospel and served the Lord wherever He took them. Throughout those years, Marylin embraced her role as a Reverend’s wife and found her passion for children’s ministries. David and Marylin were blessed with twenty-four love-filled years before he passed away in 1998. Marylin reflected in one of her writings, “Our life was filled with modern day miracles…ones we did not deserve…but God had a plan!” In the next chapter of her journey, Marylin focused on her growing family tree – grandchildren and great-grandchildren. She traveled between her home in Pensacola and her daughter’s home in Michigan. She had no intent to marry a third time, but again, the Lord had other plans for her. William (Bill) Funchess, an old friend from the United Methodist church, was widowed and looking for a companion. Prior to her passing, Bill’s wife provided him a list of widows saying, “maybe one of them will have you because you can’t even pick out a suit of clothes by yourself!”. She’d placed her friend Marylin’s name at the top of her list knowing what a wonderful caregiver she would be for Bill. After many conversations over McDonald’s breakfasts, Marylin agreed to Bill’s persistent pursuits, and they were married in 2003. They were together for five years until his passing in 2008. Marylin described Bill as her Boaz, a provision from God. Marylin spent the last fourteen years focusing on writing a book of her life’s journey and sharing her testimony. She was a force stronger than any storm she endured, and she drew that strength from her Savior. Marylin is survived by her four children; Vicky (Curtis) Britcher, Michael (Suzie) Farthing, Michelle (Bill) Moore, and Amy Smith; ten grandchildren; and twelve great-grandchildren. She was preceded in death by her husbands; Roy Duane Farthing, David Stanley Smith, and William Walton Funchess Jr.; her infant son, Robbie Joe; and her brother, Dale Chester Fundum Jr. While Marylin’s family grieves her loss, they are choosing to remember her in a way that honors her free spirit and her wishes. There will be a private celebration of life in Pensacola, Florida, on Saturday, February 19, 2022. In lieu of flowers, the family would like donations to be made to the First City Art Center Youth Scholarship Fund in honor of Marylin’s passion for teaching art to children. https://www.firstcityart.org/get-involved/youth-art-scholarship-fund/

On January 19, 2022, Marylin Jean Funchess passed away peacefully in her home at the age of 84. Marylin&#8217;s greatest loves were her family and her faith. She had the most compassionate of spirits and sought out every opportunity to share... View Obituary & Service Information

The family of Marylin Jean Funchess created this Life Tributes page to make it easy to share your memories.

Send flowers to the Funchess family.