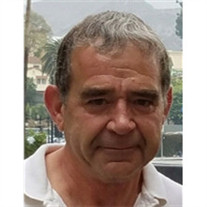 Mark Joseph Cormier passed away in Pensacola, Florida on October 23, 2021 at the age of 62. Mark was born on December 9, 1958 in Natick, Massachusetts and spent his childhood in Massachusetts as one of seven brothers and sisters. After graduating from King Philip High School in Wrentham, he joined the United States Army at the age of 17. While in the Army, he was stationed in South Korea where he met and married the love of his life, Eun Ja. Mark and Eun Ja have three children, David, Melissa, and Jessica. After the Army, Mark spent 35 years working for ExxonMobil, offshore, in Alabama, and in Louisiana. He also owned and operated a Subway restaurant with his wife for 16 years. Mark was the type of person who made friends wherever he went and found humor in everything. If Mark was anywhere nearby, you could usually find him by following the sound of his laughter. He took pleasure in simple things, like enjoying a cold Diet Coke on his back porch, listening to rock music, relaxing with his dogs, and watching the New England Patriots. Mark was a devoted husband who did everything in his power to make his wife happy. He and his wife loved spending quiet evenings at home or traveling together to sightsee and visit friends and family. Mark was also a caring and dedicated father and grandfather. All of his children considered him one of their closest friends, and Mark was always available to give advice, celebrate triumphs, or just listen to them. Mark had two grandchildren, one boy and one girl, who thought the world of their "grampy" and who delighted in playing small pranks on him to make him laugh. The world was made a brighter, happier, and funnier place by Mark's existence, and his family and friends will miss him immensely. He was preceded in death by his mother, Muriel Matthews; his father, Edmond Cormier; and his brother, John Cormier. He is survived by his wife of 43 years, Eun Ja; his three children, David, Melissa, and Jessica; his two grandchildren; his sister, Patty Snow and her husband Cliff; his brother, Bruce Cormier and his wife Donna; his sister, Pamela Greene and her husband Larry; his sister, Mary Martino; and his sister, Barbara Harrington and her husband Jack.

Mark Joseph Cormier passed away in Pensacola, Florida on October 23, 2021 at the age of 62. Mark was born on December 9, 1958 in Natick, Massachusetts and spent his childhood in Massachusetts as one of seven brothers and sisters. After graduating... View Obituary & Service Information

The family of Mark Joseph Cormier created this Life Tributes page to make it easy to share your memories.

Mark Joseph Cormier passed away in Pensacola, Florida on October...

Send flowers to the Cormier family.