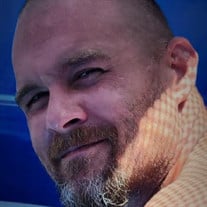 Marcus Lance Smith of Cantonment passed away June 10, 2022. Lance was a graduate of Tate High School class of 2001. Lance had several jobs after graduation but it wasn't long before he found his passion in aviation. He started with Marianna Airmotive building doors on DC planes. He then moved with Danna to Indiana. Lance worked for AAR where he worked on a production line for Airbus. He made sheet metal repairs on nose cones. From there they travelled to Orlando to work on an F35 production line for Lockheed Martin. Finally, they made it back home where Lance worked as a Plane Captain for Dynacorp at Whiting Field. Lance found his true forever love when he met Danna. After being "friends" for 10 years they finally married in June 12, 2015. In August 2015, Lance and Danna moved out west to California. There Lance worked for PAE at Barstow Daggett Airport on Black Hawks & Huey helicopters. Lance & Danna finally had enough of California and made their way back home the end of January 2022. Lance was at a crossroad trying to decide if he was ready for a career change. At the time of Lance's passing he was working with a friend in a recreational business. Lance was preceded in death by his maternal grandparents William H. McKenzie & Peggy Booth McKenzie Jackson. His paternal grandparents Morris L. & Elizabeth Smith, his Aunt, Deborah Archer. Lance is survived by his wife Danna, son Jaden Lewis, step daughters Alexia & Courtney Smith & grandson Grayson. His parents Doug & Lydia Smith, Brothers, Lonnie Smith, Shawn (Courtney) Smith, numerous aunts, uncles, nieces, nephews, cousins and friends and his beloved Baby Kane. We must mention some very special friends of Lance by name. Chris Slater, Daniel Goodwin, Shannon (Cornbread) Phillips, Randy Brasch, Dustin Ward & Pat Siemens. Each of these guys walked different roads with Lance. We are just thankful that one road led Lance & Danna back to us. Rest in Eternal peace Lance. You will be forever loved and missed. The family will receive friends on Saturday, June 25, 2022 at Faith Chapel Funeral Home North from 10:00 AM – 11:00 AM. The service will follow immediately after at 11:00 AM. Following the service, please join us at the Hadji Shrine Temple on 9 Mile Rd for lunch & fellowship. FAITH CHAPEL FUNERAL HOME NORTH, 1000 S. Hwy 29, Cantonment, FL has been entrusted with arrangements. You may express your condolences online at www.fcfhs.com

Marcus Lance Smith of Cantonment passed away June 10, 2022. Lance was a graduate of Tate High School class of 2001. Lance had several jobs after graduation but it wasn't long before he found his passion in aviation. He started with Marianna... View Obituary & Service Information

The family of Marcus Lance Smith created this Life Tributes page to make it easy to share your memories.

Send flowers to the Smith family.