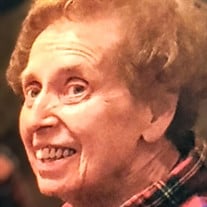 Celebrating the dedicated life of Karen Ann Hughes. Karen was born on January 11, 1936 and passed on Sunday, April 10, 2022. Karen was a devoted wife, mother of 3, and grandmother of 4. Her father was a Danish immigrant and chemist who influenced Karen's enduring work ethic. She became interested in teaching while in high school and spent 2 years at a college training school for student teachers while she was 16 and 17. Soon after, Karen attended the Oklahoma University where she met Ben, her future husband. Both Ben and Karen were college band Presidents of Kappa Kappa Psi and Tau Beta Sigma where they enjoyed organizing projects and fundraisers. At a time when women often did not further their education, Karen graduated from OU with her Bachelor’s degree in Education. She married Ben in Walden Missouri soon after. Ben and Karen remained married for over 60 years as they raised their family, traveled the world and shared a love they had for serving others through community, church, and charities. After Ben retired as an Air Force officer, they later settled in the Gulf Coast area where Karen became an educator and as well an active member of her Church, Olive Baptist. She was an avid crafter and joined many crafting clubs. One of Karen's favorite sewing projects was making pretty Christmas dresses for her Granddaughters. Till the end of her life here on earth, she was always asking about her Grandchildren. No doubt Karen's dedication to family, service and community will remain relevant as her example remains a part of us all. Life is for service - Fred Rodgers Karen is survived by - her husband, Ben Hughes, her children, Kirk Hughes, Erle Hughes, Sheryle White and her grandchildren, Jenny Halla, Caroline Hughes, Amanda Dodge and Tabitha Hayes. The service for Karen will be at Faith Chapel Funeral Home South, on Thursday, April 28, 2022 at 11:00 AM. Pastor John Dubois will be officiating. A reception will follow at Olive Baptist Church (Blue Room). Inurnment will be at Barrancas National Cemetery Naval Air Station at a later date. Expressions of sympathy are welcome, memorial contributions may be sent to - Olive Baptist Women and Children's Programs

Celebrating the dedicated life of Karen Ann Hughes. Karen was born on January 11, 1936 and passed on Sunday, April 10, 2022. Karen was a devoted wife, mother of 3, and grandmother of 4. Her father was a Danish immigrant and chemist who influenced... View Obituary & Service Information

The family of Karen Ann Hughes created this Life Tributes page to make it easy to share your memories.

Celebrating the dedicated life of Karen Ann Hughes. Karen was...

Send flowers to the Hughes family.