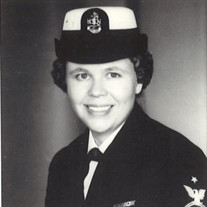 Master Chief June Kassahn, 87 passed away on Monday, March 21, 2022 in Pensacola. June was born in Crawford, Nebraska and moved to Austin, Colorado in November of 1944. June joined the Waves in July 1953. She retired as a Master Chief Radioman in January 1975. Her assignments in the Navy included instructor duty at Radioman school and recruiter in Nebraska. She served at Navy Communication Centers in San Diego, California; Lakehurst, New Jersey; Pensacola, Florida and Pearl Harbor, Hawaii. She was Chief-in-Charge of the last three centers. June attended Pensacola Jr. College under a special Navy Program and graduated in 1970. Her final assignment in the Navy was at Recruit Traning Command in Orlando, Florida. June worked for the State of Florida in Human Relations for 16 years before retiring in 1994. She was a member of the Pensacola Branch Fleet Reserve Unit 22 and the Waves National Organization. She was a member of the Ensley United Methodist Church, where she served as Lay Leader for several years. She is preceded in death by her parents, Theodore and Isabelle Kassahn; and three brothers, Ted (Ina) Kasshan of Sonora, California, Carl Kassahn of Roodhouse, Illinois, Jack (Caryle) Kassahn of Greeley, Colorado. She is survived by one sister, Doris Martin of Delta, Colorado; and several nieces and nephews. There will be a visitation at Ensley United Methodist Church on Tuesday, March 29, 2022 from 9:30am – 10:00am. The Memorial Service will follow at 10:00am with full Navy Honors. Pastor Gina Bryan will be officiating. Burial will be at Barrancas National Cemetery at a later date. In Lieu of flowers, June kindly requested that those interested in honoring her memory make a contribution to Ensley United Methodist Church, located at P.O. Box 10621, Pensacola, Florida 32524, a charity of your choice or just throw a Celebration of Life party for yourself. Faith Chapel Funeral Home South, 100 Beverly Parkway, Pensacola, is entrusted with arrangements. You may express condolences online at www.fcfhs.com.

Master Chief June Kassahn, 87 passed away on Monday, March 21, 2022 in Pensacola. June was born in Crawford, Nebraska and moved to Austin, Colorado in November of 1944. June joined the Waves in July 1953. She retired as a Master Chief Radioman... View Obituary & Service Information

The family of June Kassahn created this Life Tributes page to make it easy to share your memories.

Send flowers to the Kassahn family.