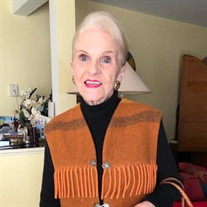 June Isabelle Adams, age 82, finished her earthly journey on April 13, 2022 in San Antonio, Texas. She was born on April 5, 1940 to John and Isabel Armstrong of Northamptonshire, England. She was of Episcopal faith and enjoyed attending Christian Life Church while living in Milton, FL. June met Bill, a handsome American Air Force man and married him on August 6, 1962 and proudly served as a supportive, dedicated military spouse for 38 years. Immediately following their wedding, they traveled across the pond to Newport News, Virginia where June took great pride in becoming an American citizen, an honor she cherished and took very seriously. The Air Force took the Adams family all over the world but after her husband retired from the military, they settled in Bill’s native state of Kentucky, raising their family in Murray and worked at Murray Calloway County Hospital. After retiring from the hospital, she and Bill relocated to the sunshine state to enjoy the good life. June was known as a sassy, little, opiniated, English spit fire who loved working in the yard, a good debate about politics, Donald Trump and a stiff Bourbon cocktail. After Bill passed away in a car accident in 2000, June relocated to San Antonio in 2003 and enjoyed socializing with new friends and her sister at the Petroleum Club, she also enjoyed working for Cartier, she was the ultimate social butterfly who never met a stranger so if a customer wanted to get away from June, they needed to buy bottle of expensive perfume. June is survived by her daughter, Karen (Tommy) McCart of Pensacola, Florida, granddaughter, Shelby Adams of Lexington, Kentucky, one daughter-in-law Cathy Jordan of Mayfield, Ky, one sister, Laraine (Vincent) Chacon of San Antonio, Texas and one brother, Douglas (Mary) Armstrong of Corby, England and numerous nieces and nephews. She is preceded in death by her parents, husband, one son, Mark Adams, niece, Anita Silva, sister, Gwen Linghor and 2 brothers, Jack and Alister Armstrong. A graveside service will be conducted by Pastor Doug Holmes at the Barrancas National Cemetery in Pensacola, Florida on Monday, April 25, 2022 at 11:00am.

June Isabelle Adams, age 82, finished her earthly journey on April 13, 2022 in San Antonio, Texas. She was born on April 5, 1940 to John and Isabel Armstrong of Northamptonshire, England. She was of Episcopal faith and enjoyed attending Christian... View Obituary & Service Information

The family of June I Adams created this Life Tributes page to make it easy to share your memories.

Send flowers to the Adams family.