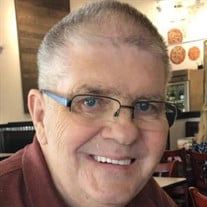 On April 8, 2022, Johnny F. Pocopanni, 71, of Pace, Fl, took his final breath here on earth and heard the words from our loving Savior, “Well done good and faithful servant”. Johnny was born on May 26, 1950, in Birmingham, AL. He is preceded in death by his father, Anthony Pocopanni, his mother, Louise Brasher Bonds, his stepfather, Gene Bonds, and his brother, Ricky Pocopanni. He is survived by his devoted wife of 30 years, Cindy Smith Pocopanni; his children, Steve Pocopanni (Danielle), Ashley Pocopanni Murcko (Randy), Melissa Pocopanni;, and Miccah Pocopanni; grandchildren, Megan Pocopanni Warren (Noah & Willow), Garrett Murcko (Sarah), Kinley Murcko, Taylor Pocopanni, Blake Pocopanni, and Caden Pocopanni; brothers, Jimmy Pocopanni (Regina) and Charlie Bonds (Sandy); he also leaves behind numerous nieces and nephews, and a very special brother in law and sister in law, Gary and Karen Berrian and their son Cody. Johnny was known as the “Best Ford Parts Man” in the business. His loyalty to his customers along with his strong work ethic was unmatched, which led him to be recognized by Ford Motor Company as a Gold Medallion Manager for many years. He passed down his love of Ford to his children and grandchildren who also work in the automotive industry. He loved all forms of auto racing, from The Daytona 500 to The Snowball Derby. Johnny was also an avid fan of the Tampa Bay Rays and the Tampa Bay Bucs. He also worked for Faith Chapel Funeral Home as an embalmer throughout his earlier years and as a transport in his later years. Most importantly, he loved the Lord with all of his heart and shared his faith and testimony with as many as he could. We would like to extend a special “thank you” to Woodlands Oncologist, Dr. Jamal Joudeh, M.D, West Florida Hospital Critical Care Unit, Covenant Care Center for Hospice, and his caregiver, Joy Ray, for taking care of Johnny throughout these last stages of his life. In lieu of flowers, Johnny and Cindy would love to support their church building program. Please make donations to refugechurchnwfl.churchcenter.com. Funeral services will be held as follows: Thursday, April 14, 2022 Visitation: 5:00 pm – 6:30 pm Funeral Service: 6:30 pm Faith Chapel North 1000 S. Hwy 29 Cantonment, FL 32533 Private burial for the family will be held on Friday. Faith Chapel Funeral Home North, 1000 South Highway 29, Cantonment, is entrusted with arrangements. You may express condolences online at www.fcfhs.com.

The family of Johnny Frank Pocopanni created this Life Tributes page to make it easy to share your memories.

Send flowers to the Pocopanni family.