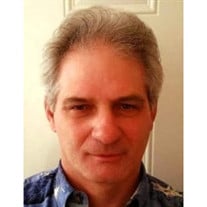 John Edward "Johnny" Simmons, Jr., passed away Wednesday, November 3, 2021, in Pensacola, FL. He was born April 7, 1963, in Pensacola, FL. Johnny was a volunteer fireman for many years. He started his career as an electrician with his father... View Obituary & Service Information

The family of John Edward :"Johnny" Simmons, Jr. created this Life Tributes page to make it easy to share your memories.