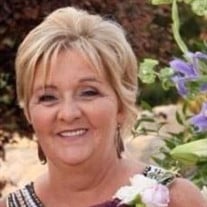 Janet Carol Brower, 63, of Pensacola, Florida, went to be with the Lord on Thursday, March 10, 2022. Visitation will be Saturday, March 19th from 2-4pm at Faith Chapel Pensacola and an additional viewing will be on Monday March 21st from 11:30am-12:30pm also at Faith Chapel Pensacola. Services will be Monday March 21st at 12:30 at Faith Chapel Pensacola. Burial will follow at Barrancas National Cemetery. Carol was born in Wilkinson County, GA, to Ray Junior and Janie Avery Kitchens on June 27, 1958. She graduated from Jones County High School in Jones County, GA. She married her high school sweetheart, John T. Brower, Sr., on December 23, 1976, in Gray, GA. Carol was a devoted military spouse who proudly supported her husband during his service in the United States Marine Corps. A loving and nurturing mother, there wasn’t much she didn’t do from Boy Scout Troop leader to room mom, and cheerleading coach. She loved to cook and feed her family with her specialties being fried catfish, dumplings, and chicken pot pie. Carol had a passion for travel but her favorite thing to do was spend time with her grandchildren. They were the light of her life. She was loved by everyone who met her and will be missed by many. She is preceded in death by her father, Ray Junior Kitchens and her sister, Brenda Kitchens. Carol is survived by her husband, John Brower Sr., her daughter, Amanda Kirwan (Matt), her son, John Brower Jr. (Brittany), her 5 grandchildren, Hayden, Finn, Noah, Ruby and Beau, her mother, Janie Kitchens, her two sisters and brother, Sara Holland, Robbie Croome (Richard), and Danny Ray Kitchens. She has three brothers-in-law and a sister in law, Chris Brower (Pauline), James Lee Brower, Darryl Brower, Tabitha Hanks (Jimmy) along with 5 nieces and 7 nephews and many grand nieces and nephews. Pallbearers will be Christopher Holland, Scott Holland, Ricky Croome, Chris Brower Jr., Ross Fuller, and Brandon Lewis. In lieu of flowers, please make donations to St. Jude’s Children’s Research Hospital and the ASPCA which were both near and dear to Carol’s heart.

Janet Carol Brower, 63, of Pensacola, Florida, went to be with the Lord on Thursday, March 10, 2022. Visitation will be Saturday, March 19th from 2-4pm at Faith Chapel Pensacola and an additional viewing will be on Monday March 21st from 11:30am-12:30pm... View Obituary & Service Information

The family of Janet Carol Brower created this Life Tributes page to make it easy to share your memories.

Janet Carol Brower, 63, of Pensacola, Florida, went to be with...

Send flowers to the Brower family.