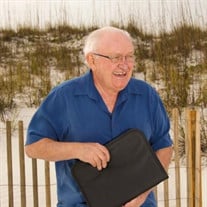 Dr. James W. Van Meter Jr., Lieutenant Colonel (U.S. Army Ret) born on 25 December 1936, in Philadelphia, Pennsylvania went to be with the Lord peacefully on Saturday, 22 January in Pensacola, Florida. He was born into a family of preachers and missionaries, the oldest son of James W Van Meter, Sr. and Mary Van Meter. He carried on the pastoral calling of his father and grandfather. After graduating from college, he married Jacquelyn Sobotka, and together they had and raised three children during Jim’s military career living in Okinawa and Germany, along with stateside postings. “The man. The myth. The legend.” He was affectionately known by many names to those whom he brought so much comfort and joy through his innate story telling, rhyming skills and an ever-present belief and faith in Jesus Christ. He loved music and played the violin and piano. Jim’s insatiable ability to love and forgive through selfless service was evident to everyone he encountered. Pastor Jim felt called into the ministry from an early age. After graduating from Southwest Missouri State College and while attending Southwestern Baptist Theological Seminary, he went on to become a soldier in the United States Army to serve as a Chaplain, and not just any kind of Chaplain either. Lt Col Van Meter was a US Army Airborne Special Forces Chaplain with combat deployments to Vietnam with the 101st Airborne division. While serving, he was recognized with multiple awards, to include the rare Air Medal with “V” Device, awarded for acts of heroism in aerial flight against an armed enemy. Although rare, he would share some of the deepest challenges he faced as an Army Chaplain – serving those soldiers who were deeply wounded spiritually or physically. He later went on to earn his doctorate at the Southern Baptist Theological Seminary. As John 8:12 states, “I am the light of the world. Whoever follows me will not walk in darkness, but will have the light of life.” Chaplain Van Meter carried that divine light caring for the spiritual, moral and emotional wellbeing of those soldiers. After retiring with over 23 years of service in 1981, Pastor Jim decided he had new mountains to climb. During his leadership, Royal Palm Christian Church in Coral Springs, Florida grew exponentially through his faithful service as their beloved pastor for over 20 years. He loved his church family dearly and compassionately and always felt it a privilege and a joy to pastor the flock. In October 2003, he married Linda Place Van Meter, and they moved to Lakeway, Texas where they enjoyed their love, laughter and life on Lake Travis, while he continued to shine His light through his leadership at Central Christian Church in Austin, Texas. Poppa loved so much in life, especially his children Anne, Cyndi, Tim, Trey, and Kirsten; stepdaughter Danielle; his grandchildren Kyezer, Austin, India, and Luca; and his great-grandsons Royce and Brooks. He also loved his brother Bob and his family, the Philadelphia Eagles, fishing and smoking chicken and ribs along with a glass of wine, not necessarily in that order though. The light is a little dimmer, the hearts of many are a little heavier, for God has called one of his savior warriors home. For those who knew him, we have been truly blessed to have called him Pastor Jim, Lt Col, Dr Van Meter, Poppa, Brother, Husband, Dad, Grandfather, Great-Grandfather, Uncle, Cousin, and Friend…. In lieu of flowers, the family is asking that donations be made to Vietnam Veterans of America or Religious Offering Fund (mailed to Command Chaplain, 250 Chambers Ave, NAS Pensacola, FL 32508).

Dr. James W. Van Meter Jr., Lieutenant Colonel (U.S. Army Ret) born on 25 December 1936, in Philadelphia, Pennsylvania went to be with the Lord peacefully on Saturday, 22 January in Pensacola, Florida. He was born into a family of preachers... View Obituary & Service Information

The family of James Wesley Van Meter, Jr. created this Life Tributes page to make it easy to share your memories.