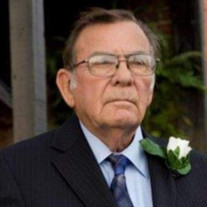 James M. Stoner was born October 11,1934, in Rockville, Indiana. He joined the U.S Navy at the young age of 17 years old and that is when airplanes became his life. He dedicated 26 years in the service. He married Kathleen July 12,1971, in Bay Minette, Alabama. He took on the father role to Kathleen's children. He adopted Carrie and Kelly from Becky, which is Kathleen's youngest daughter because he had no biological children of his own. He retired from the Navy in 1979 as a senior chief, where they lived in Pensacola, Florida. He moved to Houston, Texas where his career started at Continental Airlines. He then took early retirement and came back to Pensacola, Florida, where he eventually got a job with STS Engineering in 1998. He survived his 1st wife's death in 2013 and continued to work for his family. As the years went by, he met a beautiful woman named Wannakhon, and jokingly asked if she needed a boyfriend. From there they grew a wonderful friendship. The caring between the two of them grew and on August 28, 2020, they got married in Mobile, Alabama. They bought a house together in Pensacola, FL. As they were building their marriage, he became ill where she took on his care. He had to quit working and she was by his side at the time of his death. He is preceded in death by his dad, Clarence Hamilton Stoner; mother, Helen Martin Stoner; and wife, Kathleen C. Stoner. He is survived by his wife, Wannakhon Corry Stoner; children, Carrie Obed and Kelly Sparks; grandchildren and great-grandchildren. Visitation will be Wednesday, June 8, 2022, from 12:00 to 1:00 PM, at Faith Chapel Funeral Home South. Memorial Service will follow at 1:00 PM. A Graveside Service will be Thursday, June 9, 2022, at 2:30 PM, at Barrancas National Cemetery, NAS Pensacola, FL. Pallbearers will be Garrett Malone, William Stoner, Jeremy Sparks, David Obed, Hunter Howard and George Valletta. Faith Chapel Funeral Home South, 100 Beverly Parkway, Pensacola, is entrusted with arrangements. You may express condolences online at www.fcfhs.com.

James M. Stoner was born October 11,1934, in Rockville, Indiana. He joined the U.S Navy at the young age of 17 years old and that is when airplanes became his life. He dedicated 26 years in the service. He married Kathleen July 12,1971, in Bay... View Obituary & Service Information

The family of James Stoner created this Life Tributes page to make it easy to share your memories.

Send flowers to the Stoner family.