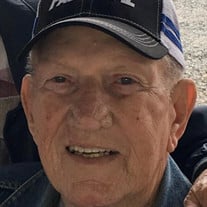 James Edward Griffin, 86, was born and raised in Stokes County, North Carolina. He left on December 16, 1955, to proudly serve his country for the next 20 years. He retired in Bossier City, LA where he stayed until he returned home to Stokes County on December 16, 2016 (61 Years to the day) where he would live out his remaining years. James was an incredibly strong man of simple pleasures who valued his family and friends above all else. A relatively quiet man that always knew how to bring people together with a joke or a story. He constantly had a smile on his face and was the best at putting one on the faces around him. He loved making a huge pot of gumbo or smoking a big hunk of meat for a table full of guests. He made the best fried catfish dinner and to him, cooking them was almost as fun as catching them. He loved going fishing with his friends and family. He could spend all day on the lake when he had the chance. James was a dedicated husband, brother, father, and grandfather. He loved to aggravate his sisters, and he made sure to spend the last five years doing just that. They supported him through every health crisis; always altering their schedules so they could take him to appointments, helping him care for his wife before she passed, and taking care of him as he became home-bound. They were a God send to him and his children. He cherished each moment spent around his children, grandchildren, and great-grandchildren teaching them how to be excellent anglers and even better people. James lived a life worth celebrating and he leaves behind a legacy of love and hard work. James was preceded in death by his wife, Barbara Griffin; his son, Michael Scott Griffin; his mother and father, Sally Wall Griffin and Jasper Lewis Griffin; as well as his brother, Lewis "Big Boy" Griffin, Richard Griffin; and his sister, Louise Ligon. Left to cherish his memories are his daughter, Karen "Katy" Taylor; and son, Richard "Ricky" Griffin; as well as his grandchildren, Nicholl Taylor and Stephen Taylor; he also leaves behind his two great grandchildren, Jayden and Bryce Moore; and his sisters, Brenda Eriene Gilley and Tannie Jean Harper; his faithful dog, Sally; as well as a host of nieces and nephews in North Carolina and Florida Visitation will be held at Faith Chapel Funeral Home South on Wednesday, December 22, 2021 from 12:00 PM to 12:30 PM. The service will follow immediately after the visitation on Wednesday, December 22, 2021 at 12:30 PM. Interment will be at Barrancas National Cemetery with military honors. Chaplain David Gibson will be officiating. Faith Chapel Funeral Home South, 100 Beverly Parkway, Pensacola, is entrusted with arrangements. You may express condolences online at www.fcfhs.com.

James Edward Griffin, 86, was born and raised in Stokes County, North Carolina. He left on December 16, 1955, to proudly serve his country for the next 20 years. He retired in Bossier City, LA where he stayed until he returned home to Stokes... View Obituary & Service Information

The family of James Edward Griffin created this Life Tributes page to make it easy to share your memories.

James Edward Griffin, 86, was born and raised in Stokes County,...

Send flowers to the Griffin family.