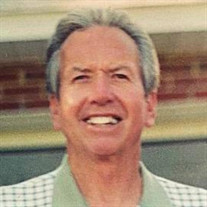 James “Jimmy” Arnold, Sr. age 86 of Gonzalez passed away Saturday, January 29, 2022. Jimmy graduated from Tate High in 1953. He was a lifetime resident of the Gonzalez area and was very proud of this. Jimmy left Gonzalez only a short time while playing football for the University of Chattanooga. After college his love of cars ignited a passion for racing. During his racing years, he was known as a small town man going “Nowhere to Somewhere” fast with notable accolades: 1964 NHRA champion, 1965 NASCAR Stock Drag Race Champion with his well-known “Color Me Gone” Dodge, and held several state records. In September 2003, Jimmy “Color Me Gone” Arnold was inducted into the Drag Racers Hall of Fame. As a single father he gave up racing to focus on family and his career with SERF. He retired from Pensacola Junior College as a welding instructor where he touched many lives and guided many futures. In 1991, he was honored by the American Welding Society with the District Educator Award. Jimmy loved to help others in his community. He was honored in 2008 as a fifty-year Master Mason and belonged to the Hadji Shrine Antique Car unit- his love of cars never faded. Jimmy was known as a man who lived life to the fullest, loved people, God and family. He loved to laugh and fellowship with friends. Jimmy never met a stranger. He was a loving father and “Poppy”, uncle, and friend. Of all the titles and honors given to Jimmy, these meant the most. Although his final race on earth has been won, his kindness, laughter and adventurous spirit will be greatly missed and never forgotten. Survivors include his son, J. Douglas Arnold, Jr. and wife Kristin; his son Derrick Arnold; his daughter, Keri Arnold Litton; grandchildren: Jaime Arnold, Jaxon Arnold, Madison Arnold, Lauren Litton, Morgan Litton, Jayden Arnold, and Jagger Arnold; brothers, M.J. Arnold, Billy Arnold and wife Vivian; sister Sharon Steelreath; sister-in-law, Joan Arnold; several nieces and nephews and extended family: Greg Litton, Rachel Southworth Hughes, Gary Southworth, and Kristen Southworth Abbott. Visitation service will be held at 1:00 p.m. until 2:00p.m. with memorial service following at 2:00 p.m., Thursday, February 3, 2022 at Faith Chapel North. FAITH CHAPEL NORTH FUNERAL HOME, 1000 Hwy 29, Cantonment is in charge of arrangements Condolences may be placed online @fcfhs.com.

James &#8220;Jimmy&#8221; Arnold, Sr. age 86 of Gonzalez passed away Saturday, January 29, 2022. Jimmy graduated from Tate High in 1953. He was a lifetime resident of the Gonzalez area and was very proud of this. Jimmy left Gonzalez only a short... View Obituary & Service Information

The family of James Douglas Arnold created this Life Tributes page to make it easy to share your memories.

Send flowers to the Arnold family.