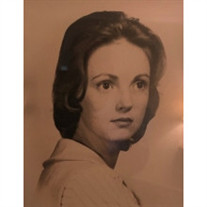 Helen June Steyne passed away on October 20th, 2021. She was 79 years old. Born in Louisville, KY she was the daughter of Clifton Vance and Velma Irene Cherry. Early in her childhood, the Cherry family re-located from Kentucky and settled in Spencer, OK. The next important chapter in her life (which lasted 62 years) began when she met a young US Navy airman - John Eugene (Gene) Steyne - going through Navy training and the rest is history. John Eugene Steyne and Helen June Cherry tied the marriage knot on March 01, 1959 in Gainesville, TX and renewed their marriage vows in the Catholic Church on August 22, 1964 in Brunswick, ME. Shortly after starting their married life together, she and Gene welcomed three sons into the world - Scott, John Jr, and Jeffrey. While making sure that three active boys got to school, baseball games, bowling leagues, and many more activities, she also started a 22-year career with the Navy Exchange Command, retiring in 1995. After retiring she began the life of the spoiling grandmother to all who filled the role of grandson(s) and granddaughter(s). To all, she was Mother, Grandmother, Aunt, but equally important, Friend to all that knew her and enjoyed her company. While she has now left this earth, she has gone to heaven to take care of Scott who has been waiting for her. She is survived by her husband: John Eugene Steyne, two sons, John Steyne Jr. (Jane), Jeff Steyne (Jamie); grandchildren Nicholas Edward Steyne, Kimberly Anne Steyne, Kiera Irene Steyne, Krystal Colleen Woodard (Roger), Micah Daniel Hallman, and Misty Dianne Kiker (Jerry); and seven great grandchildren. Helen is predeceased by her parents; and her 1st son, Barry Scott Steyne. The family would like to extend its appreciation to Ms. Tina Stone, who provided gifted and compassionate care to Helen and also Gene during the most recent months of this year. The family also wants to recognize Ms. Lillian Steyne for all of her compassion and friendship that she showed during Helen's life and in recent months. Interment will be held at 10:30 a.m. on Friday November 19, 2021 in Barrancas National Cemetery, Naval Air Station Pensacola, FL. Pastor Steve Bruce officiating. Funeral procession will leave Olive Baptist Church Warrington Campus at 10:00 a.m.

Helen June Steyne passed away on October 20th, 2021. She was 79 years old. Born in Louisville, KY she was the daughter of Clifton Vance and Velma Irene Cherry. Early in her childhood, the Cherry family re-located from Kentucky and settled in... View Obituary & Service Information

The family of Helen June Steyne created this Life Tributes page to make it easy to share your memories.

Send flowers to the Steyne family.