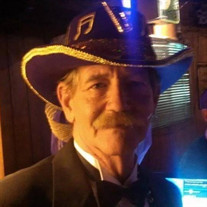 Harry Francis Swauger passed away Monday, December 27, 2021, in Pensacola, FL. He was born July 7, 1956, in McKeesport, PA. He grew up in Port Vue, PA, and attended Allegheny High School. His family had close ties to the Pittsburgh Pirates, and he was a lifelong Pittsburgh Steelers fan. After high school, he joined the U.S. Navy, where he enjoyed a 14 year career before retiring as a First Class Petty Officer in 1990. He later enjoyed a career in manufacturing and field service, and then found his true passion as a Karaoke Jockey. His love of singing, combined with his love of people, made him the perfect KJ – respected by many and adored by all. Harry was a member of the VFW Post 706 and AMVETS Post 12. He and his wife, Jamie, also enjoyed membership in the Krewe of Chanteuse, where they would celebrate the Mardi Gras season with their friends, who were more like family. Harry had the unique ability to make people feel loved, accepted and encouraged. He would do anything and everything in his power to take care of the people he cared about. His light will forever shine as a beacon – a reminder to all of us that love is the answer. Harry is preceded in death by his mother, Gloria Louise Wright Swauger; father, John Albert Swauger; and brother, John Albert Swauger, Jr. Harry is survived by his wife, Jamie Swauger; daughter, Trista Marie Denson (Matthew); sons, Aaron Matthew Swauger (Tiffany), Brian Matthew Swauger, Nicholas Seth Meyer; stepsons, Ryan Barrett Hall, Jarred Cecil Hall (Kayla), James Derrick Hall (Jennie), Jordan MacIntyre Hall, Justin Tyler Hall; sister, Diana Lynn Swauger Kramer; sister, Kathy Sue Swauger Sanguillen; 15 grandchildren and one great grandchild. Visitation will be Wednesday January 5, 2022 from 5:00 to 7:00 PM, at Faith Chapel Funeral Home South. Funeral Service will be Thursday, January 6, at 12:30 PM, at the Funeral Home. Pastor Mike Moulton will be officiating. Interment will be at Barrancas National Cemetery, NAS Pensacola. . Pallbearers will be Aaron Swauger, Jarred Hall, James Hall, Jordan Hall, Justin Hall, Roy Padgett, Keith Kilgen and Kevin Sutton. Honorary pallbearers will be Silva Saxon and Jerrell Beckham. Faith Chapel Funeral Home South, 100 Beverly Parkway, Pensacola, is entrusted with arrangements. You may express condolences online at www.fcfhs.com.

Harry Francis Swauger passed away Monday, December 27, 2021, in Pensacola, FL. He was born July 7, 1956, in McKeesport, PA. He grew up in Port Vue, PA, and attended Allegheny High School. His family had close ties to the Pittsburgh Pirates,... View Obituary & Service Information

The family of Harry Francis Swauger created this Life Tributes page to make it easy to share your memories.

Send flowers to the Swauger family.