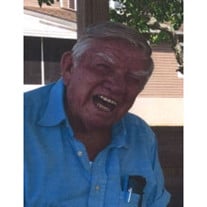 Grady Lee Wilson Sr of Pensacola, Florida passed away on Friday, November 26th, 2021, at the age of 86. After several months of declining health, Grady died peacefully with his beautiful bride Catherine and their children by his side. Grady was born in Brewton, Alabama on January 28th, 1935, to father Richard Wilson and mother Evie Pugh Nowling. He was the youngest of seven. Grady finished his schooling after graduating the eighth grade. He helped out with his family and worked any odd job he could find starting at an early age. His work ethic and desire to take care of his family led to him to start driving a truck and getting in the moving business in the 1950s. In 1968, he started working for Ferriss Moving & Storage. By 1982, he was the president and sole owner of the company which he was still working at up until his passing. Grady married his childhood sweetheart Catherine at the young age of 17, in 1952. Together they had five children. They were happily married for 69 and a half years. They have 9 grandchildren, 15 great grandchildren and 3 great great grandchildren. He was a very active member of Rosinton United Methodist Church and Innerarity Point Baptist Church. Grady was preceded in death by his parents, his six siblings, his oldest son Grady Allen Wilson, and grandson Grady 'Tra" Wilson III. He is survived by his wife Catherine; his children Grady Lee Wilson Jr, Deborah Kathyrn Silcox, Brenda Kaye DeFoe, Gary Lynn Wilson, and Lee Wilson, his grandchildren, great-grandchildren and great-great-grandchildren. Visitation will be Saturday, December 4, 2021, from 10:00 to 11:00 AM, at Faith Chapel Funeral Home South. Funeral Service will follow at 11:00 AM. Reverend Chad Johnson and Reverend Bill Wade will be officiating. Interment will be at Clopton Cemetery. Faith Chapel Funeral Home South, 100 Beverly Parkway, Pensacola, is entrusted with arrangements. You may express condolences online at www.fcfhs.com.

Grady Lee Wilson Sr of Pensacola, Florida passed away on Friday, November 26th, 2021, at the age of 86. After several months of declining health, Grady died peacefully with his beautiful bride Catherine and their children by his side. Grady... View Obituary & Service Information

The family of Grady Lee Wilson created this Life Tributes page to make it easy to share your memories.

Send flowers to the Wilson family.