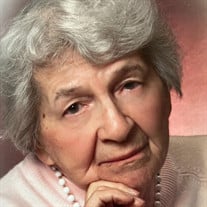 Gladys “Betty” Leaver Nuhfer Brooks, 98, of Pensacola, FL, formerly of Monongahela, entered her heavenly rest with her family at her side on Saturday, April 2, 2022. She was born in Belle Vernon on October 24, 1923, to the late George C. and Mary Cecelia Manning Leaver. She was a life-long member of First Baptist Church of Monongahela, where she was active in the church choir, ladies trio, Sunday School teacher and on different committees. During her senior years, she sang with the Transfiguration Church choir, directed the AARP choir, served as a recorder of items donated to the Monongahela Historical Society and was a volunteer administrative assistant at the Senior Center. She also competed at Senior Olympics events on the county, state and national levels, winning many medals, directed music and performed in the Senior Center’s “Showboat” performances for Meals on Wheels and participated in the Foster Grandparent program with 1st graders at Ringgold Elementary Center. A homemaker for most of her life, she was also employed as a delivery person for the former EMMS Flowers. She enjoyed music, traveling to see her family and spending time with her friends. She was preceded in death by her husband of 47 years, Raymond C. Nuhfer (December 29, 1993), her 2nd husband of 11 years, Charles G. Brooks (May 14, 2007), her sister, Mary C. Condie, and her brother, Charles C. Leaver. Surviving are her children, Mary (Gene) Emery of Bow, NH, Barbara (Paul) Henderson of Pensacola, FL and Rev. David (Paulette) Nuhfer of Zanesville, OH; 6 grandchildren, Michelle (Shannon) Dunn, Charity (Michael) Jackson, Christopher Henderson, Jennifer (spouse Doug Penney) Emery, Chad Sherman and Michael Henderson; 3 great-grandchildren, Joy Dunn, Sienna Jackson and Marleigh Jackson; her sister-in-law, Jackie Leaver; many nieces and nephews and her stepchildren in the Brooks family, with special thanks to Chuck and Monica Brooks, who provided much help and support as needed. The family would also like to thank Rev. Riley Richardson, Senior Pastor of Myrtle Grove United Methodist Church in Pensacola; Dr. Christopher Rush; Cindy (Betty's caregiver/friend from TLC Caregivers), the staff of Kindred In Home Healthcare and the staff of Emerald Coast Hospice, in particular nurses Carolyn and Sandra for excellent care and compassion during this time. Friends will be received from 11:00 a.m. – 1:00 p.m. on Saturday, April 9 at First Baptist Church, 601 W. Main Street, Monongahela, with a memorial service at 1:00 p.m., with Rev. Mark Schollaert and Pastor Kenneth Kirby officiating. Interment will follow in Monongahela Cemetery. In lieu of flowers, the family suggests that memorial donations be made to Myrtle Grove United Methodist Church (1030 N. 57th Avenue, Pensacola, FL 32506) Eastside Community Ministry (221 Stillwell Street, Zanesville, OH 43701), or the Washington Area Humane Society (PO Box 66, Eighty Four, PA 15330.)

The family of Gladys Elizabeth Brooks created this Life Tributes page to make it easy to share your memories.

Send flowers to the Brooks family.