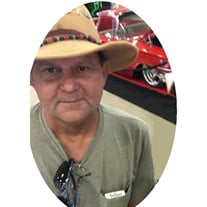 Gerald H. Breaux passed away March 14, 2022, in Pensacola, FL. He was born December 5, 1958, in Charleston, SC. He was a sheet metal mechanic by trade for most of his life. He was married at 18 to his high school sweetheart, Lisa, who he had two children with, Jay and Wanda. Later in life, he had a second love, also named Lisa. He had a type. That’s when he met a boy that would become like his third child, Joey. Jerry spent most of his life in Pensacola. He loved the beach, the river, and anything that involved the water, but not getting in it. He loved watching the races and building things with his hands. Jerry was a man, husband, father, partner, teacher, tradesman, mechanic, engineer, carpenter, landscaper, therapist, cowboy, car enthusiast, best friend and a self-professed coon-ass. Jerry wore many hats throughout his life, adapting to fit the role that was required at the time by those he loved. He was always one phone call away for his friends and family. You would find him on a given weekend either tending to the yard or sitting by a fire. He enjoyed good vittles, an ice-cold beer and good old country music. Jerry is preceded in death by his sister, DeAnna Veleda Breaux and sister, Wanda Theresa Morgan. Jerry is survived by his son, Gerald Henry Breaux, III; daughter, Wanda Rebecca Breaux; sister, Gwenda Kathryn Spivey; sister, Cynthia Anne Thriefenbach; brother, Eric Thomas Breaux; brother, Cletes Davis Breaux; brother, Michael H. Breaux; and former wife (32 years married), Lisa Diane Breaux. Visitation will be Saturday, April 9, 2022, from 9:00 to 10:00 AM, at Faith Chapel Funeral Home South. A Memorial Service will follow at 10:00 AM. Jerry will be missed daily, but the lessons he taught each of us will live inside of us forever.

Gerald H. Breaux passed away March 14, 2022, in Pensacola, FL. He was born December 5, 1958, in Charleston, SC. He was a sheet metal mechanic by trade for most of his life. He was married at 18 to his high school sweetheart, Lisa, who he... View Obituary & Service Information

The family of Gerald Henry Breaux II created this Life Tributes page to make it easy to share your memories.

Send flowers to the Breaux family.