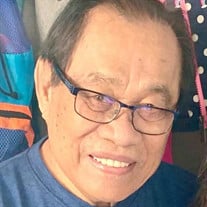 Fruto H. Apostol, Jr., 82 passed peacefully on March 12, 2022, at Covenant Hospice, Ascension Sacred Heart Hospital. A man of faith and love, Fruto was devoted to family and country. Fruto was born on October 9, 1939, in Manila, Philippines to Pilar and Fruto, Sr. Fruto was one of six children. His parents encouraged their children to focus on their education and while studying to be a teacher at Manuel L. Quezon University, an opportunity to enlist in the U.S. Navy came up. His father encouraged him to take the test to qualify and Fruto passed with flying colors. Fruto enlisted on May 28,1965 at Sangley Point, Philippines. During his twenty-two years of military active service, Fruto received the following commendations: The Good Conduct medal (three times) The Vietnam Service Medal (with two bronze stars) The National Defense Service medal The Sea Service Deployment ribbon (first award) – U.S.S. Donald B. Beary (FF-1085) In addition to these honors, Fruto had a life of adventure cruising around the world two times (!) often bringing home treasures from his deployments. His adventures earned him initiation and membership in reaching milestones: On February 18, 1966 - Fruto on the U.S.S. Stickell (DD 888) crossed the 180th meridian and was granted membership in the Silent Occult Mysteries of the Far East of the Domain of the Golden Dragon. On July 10, 1966 - Fruto crossed the equator on the U.S.S. Stickell (DD 888) and was initiated into the Solemn Mysteries of the Ancient Order of Shellbacks of the Imperium Neptune Regis. On August 17, 1966 - Fruto on the U.S.S. Stickell (DD 888) completed an around the world cruise and was initiated into the Solemn Mysteries of the Seven Seas of the Ancient Order of Magellan. On May 3, 1975, Fruto was honored as a member of the original illustrious crew which commissioned the U.S.S. Nimitz CVAN 68 and entitled to all the rights and privileges of a Plank Owner. During his 5 year disability retirement, Fruto and family returned to the Philippines and he completed his studies to graduate from De Ocampo with a Bachelor's Degree in Medical Technology. After service in the Navy, Fruto also worked at the Department of Veterans Affairs Hospital in Pensacola serving Veterans for several years. More importantly, he was devoted to family. His enlistment in the U.S. Navy paved the way for future generations and opened the door to opportunities for his family. Fruto was a masterful cook and avid reader. In his younger years, he developed a love for the Celtics and enjoyed playing the guitar, singing, and fishing. In retirement, Fruto continued to be a Celtics devotee, began collecting precious coins, watching Fox News, and engaging in conversations about world politics, especially the politics in the Philippines. He loved attending the Children's Mass at Little Flower, spending time with his children and grandchildren, and connecting with his nieces and nephews. Preceding Fruto in death were his parents Pilar and Fruto Sr., his siblings, Leonardo Apostol, Romeo Apostol, and Nancy Arizo Fruto is survived by his wife, Jessie Asuncion Apostol, by his three children, Donn Apostol (wife Emma), Donna Apostol Heimlich (husband Marc) and Daniel Apostol (partner, Jessica Armullas). 7 grandchildren, Jessica Gayo, Ronen, Stella, and Emme Heimlich, Courtney, Amelia and Quinn Apostol, his sister, Norma Apostol of Champlain, Illinois, brother Raul Apostol, Manila, Philippines and several cherished nieces and nephews. On Tuesday, March 22, 2022, the family will celebrate Fruto's life at Little Flower Chapel on 6495 Lillian Highway, Pensacola, Florida 32506 : The family will pray the rosary at 9:30 - 10 am and greet friends for an open visitation from 10 - 11 am. Mass and funeral service will start at 11, followed by procession of cars to his Committal Service with full military honors at Fort Barrancas at 1pm. Family and friends will gather for lunch and refreshments afterwards at Little Flower Chapel. Condolences may be shared at www.fcfhs.com. Final arrangements entrusted to Faith Chapel South Funeral Home, 100 Beverly Parkway, Pensacola, Florida 32504, (850) 432-6146. In lieu of flowers, contributions can be sent in Memory of Fruto to Shriner’s Hospital for Children, EIN 36-193608.

The family of Fruto Huarde Apostol, Jr. created this Life Tributes page to make it easy to share your memories.