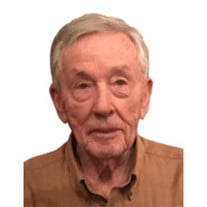 Ferris Eugene "Gene" Booker He was born in Holt FL August 9, 1930 and grew up in Pensacola. Preceded in death by parents Nolen and Ruth Booker, wife Dottie, son-in-law Bill Dreadin, brother-in-law Bobby Wells and niece Dawn Wells. He is survived by son Scott Booker (Cynthia), daughter Kathy Booker Dreadin, sister Mary Nell Wells, grandchildren Ansley Dreadin Kynes (Matt), Allen Booker, (Kristina), Kline Dreadin Stackhouse (Troy), Charles Taylor (Marlene), great grandchildren Gracin, Truett, Powell and Cecily Kynes, Landry Stackhouse, Lyanna Taylor, Logan, Landon and Olivia Ashcraft, nieces Lynn Carpentier (Mike) and Beth Diss (Mark) and nephews Robert, Chip (Brook) and Dain Wells. He graduated from Pensacola High School and went on to graduate with high honors from the University of Florida with a BS in Building Construction. He was a member of Pi Kappa Alpha fraternity and Phi Kappa Phi Honor Society, and while in Gainesville, met his future wife Dottie Chambliss. He served in the US Navy and the US Army. He then came back to his hometown area of Pensacola and started F E Booker Company in 1958 and was in the construction business for over 50 years. He was commissioned by the governor of the State of Florida to co-write and implement the state contractor's licensing exam. He received the second license issued (CGCA00002) in the state of Florida and served on various committees of that board as well as The Associated General Contractors of America and the University of Florida College of Building Construction. He was involved in many organizations in the Pensacola area. He was a long standing board member and past president of Baptist Health Care Foundation, and past president of the Pensacola Chamber of Commerce. He was a member of York Rite, Escambia 15 Masonic Lodge, and Gulf Breeze Masonic Lodge. He was also a member of the Scottish Rite and received the 33° Grand Cross of the Court of Honor, which is the highest individual honor bestowed to Masons for exceptional and extraordinary service. He was one of the early members of Gulf Breeze United Methodist Church, and served on local and district boards and was past chairman of the United Methodist District Building Planning and Locations committee. He belonged to Pensacola Beach Elks Lodge, Pensacola Country Club and various Mardi Gras groups. He had many interests and hobbies including beekeeping, winemaking, fishing, hunting, playing golf, and coin and stamp collecting. He died November 3, 2021 after a lengthy battle with Parkinson's Disease. In lieu of flowers- contributions can be made to the United Methodist Committee on Relief (UMCOR) via the Gulf Breeze United Methodist Church.

The family of Ferris Eugene Booker created this Life Tributes page to make it easy to share your memories.