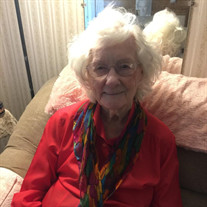 Eugenia Boutwell Freeman passed away March 02, 2022 at 103 years of age. She was born on June 27, 1918, to Ollie Chappel Boutwell and Sarah Elizabeth (Bagget) Boutwell. She grew up in Jay, FL and with her husband, later moved to Warrenton Fl. then to Cantonment, Fl. She married Lloyd Ethan Freeman, on August 30, 1942. Together they built their home in Cantonment with every board and every nail being placed in the structure with their own hands. They lived in that home together until her husbands death on June 21, 2007. Eugenia continued to live in the home until she passed away. To all who knew her she was known as "Bee." Due to an unfortunate encounter with a swarm of bees when she was young. They had two sons, Larry Lynn Freeman and Randy Ray Freeman who married Pamela McNair (Deceased). She was a home maker, wife, mother, grandmother and great-grandmother. Everyone who knew her also knew of her love for the Lord. She spent many hours in bible study with friends and family. Eugenia had a passion for sewing, painting, decorating, cooking and many other hobbies which showed her creativity. She is preceded in death by her parents, husband, Lloyd Freeman, son Larry Lynn Freeman and Daughter-in-Law Pamela McNair Freeman. She is survived by her son, Randy Ray Freeman of Frisco, TX; grand-children Robyn Freeman Edwards and husband Shannon Ray Edwards; Paige Freeman Draper and husband Justin Wade Draper; Courtney Freeman Smith and husband Jacob Brandon Smith; great grand-children Christian Kane Magee, Avery Ruth Edwards, Hannah Elizabeth Osborn, Katherine Paige Osborn, Asher McNair Smith, Addison Claire Smith and Isabelle Lauren Smith. She was the one constant in our lives. The rock which never faltered. She was always there, always dependable and always sharing all that she had. It would make her sad when we had to leave after a visit. She would stand in the doorway and wave as we drove off. She would stand there till we drove out of sight. Always looking forward to the next visit. Because of her, we always knew we had a place called home. She was strong willed and strong minded. In a time when women were expected to be less, she was a women to be dealt with. In her latter days her eyes and hearing began to fail her. She began to have trouble reading her precious bible and conversations were sometimes very difficult. But her mind continued to be sharp right up till the end. She never gave up, never quit, never bent to the overwhelming forces of nature. She battled till her last breath. How do you some up 103 years, eight months and three days in a few words. All that can be said is, she gave us life, kept us safe and gave our lives meaning here on earth. Now she is a shining light in Heaven. Now she is with Lloyd, Larry and Pam. She is happy now. She will be missed beyond measure but will continue to be loved through time and all eternity. A grave side service to honor her life will be held at Pine Level Cemetery, Jay. Florida Tuesday March 8, 2022 at 10:00 AM. We will not see the likes of her again. God speed. I love you mother.

Eugenia Boutwell Freeman passed away March 02, 2022 at 103 years of age. She was born on June 27, 1918, to Ollie Chappel Boutwell and Sarah Elizabeth (Bagget) Boutwell. She grew up in Jay, FL and with her husband, later moved to Warrenton... View Obituary & Service Information

The family of Eugenia Boutwell Freeman created this Life Tributes page to make it easy to share your memories.

Send flowers to the Freeman family.