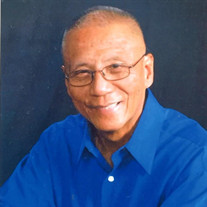 Dr. Emedio Bulosan Bulosan “Emie,” 81, passed away peacefully at home surrounded by family on Monday, April 11, 2022. Emie was born in Binalonan, Pangasinan, Philippines on August 5, 1940. He is preceded in death by his wife of 45 years, Nelia Robles Bulosan, his parents, Venancio and Casimira Bulosan. He is survived by his brother, Rudy (Estela) Bulosan, three children Richard (Bernadette), Aimee (Brad) and Jimmy (Lesley) and six grandchildren Christian, Alyssa, Mark, Matthew, Apollonia and Nico. Emie was a Commander in the United States Navy and served from 1975 until 1996. He enjoyed a fulfilling career as a general practitioner and specialized in Aviation Medicine while serving in the Navy. After he retired, he continued his medical practice at Sacred Heart Urgent Care clinic in Pensacola, FL. He was a devout Catholic and belonged to many faith-based groups including the Knights of Columbus, the charismatic prayer group at St. Mary Catholic Church in Pensacola, FL, and the Legion of Mary in Portland, OR. He loved traveling and especially enjoyed exploring different cities in Europe when he and his family were stationed in Signonella, Italy. There will be a visitation on Monday, April 18, 2022 from 10:30 AM to 12:00 PM located at St. Mary’s Catholic Church. The service will follow immediately after at 12:00 PM. Father Eugene Pathe will be officiating. Interment will be at Barrancas National Cemetery.

The family of Emedio B Bulosan created this Life Tributes page to make it easy to share your memories.

Send flowers to the Bulosan family.