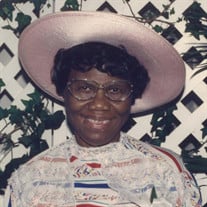 Eileen Ethlyn Benjamin, affectionately known to all as “Miss Lyn,” was born December 1, 1927, daughter of Ann (Martin) Benjamin and Ronald Benjamin. Her fervent love for Christ and longing for His return mark her memory in our hearts. Little is known about Lyn until her Bible college days in her forties. She attended Bluewater Bible College and Institute, of St. Thomas island, in 1972-1973, achieving above-average grades. Her family financial situation is cited as a reason why she failed to continue her studies beyond one year. She also attended Grace Baptist College in St. Thomas, a school overseen by Grace Apostolic True Gospel United Church of Jesus Christ Apostolic. At Grace Apostolic she also served as a Sunday School teacher and organist, and gave “exhortation in Bible studies.” Pastor Randolph Whyte of Grace Apostolic testified that during this period, “Miss Benjamin [was] very intelligent, courteous, respectful, and hard-working in her endeavors, always reliable, dependable, and determined to win souls by giving out tracts, religious books, and witnessing to the unsaved.” Pastor R V James of Bible Church of God, Golden Grove, Antigua, also commended her from those days, “I have known her for many years through the church of which I was a pastor. Miss Benjamin is a sincere and honest person who loves God and her fellow men. She was a regular member at Prayer Meetings, Church services, and always provides Bibles, religious books, tracts, and gives monetary contribution to help in the work of the Lord…She has voluntarily decided to dedicate herself as a missionary.” For many years leading up to her retirement from civil service in 1992, Miss Lyn was employed as a cashier and janitor by the Antigua and Barbuda Port Authority of St John’s, Antigua. Miss Lyn first heard about Mt Zion through Radio Paradise, St. Kitts, in January 1990. Upon request for literature, Mt Zion sent her “fairly large quantities” which she distributed to others. Here is an extract from one of her letters: “Each day I would carry my shoulder bag filled with these books and tracts, handing them out to passers-by. I took them to the bus parking areas, distributing them as I witnessed to the recipients. I sent tracts and books to people with whom I corresponded. I even took large mounts to the church I attended for distribution.” With her retirement from the Port Authority coming up in 1992, she wrote to Mt Zion offering to come and help out as a retired volunteer. Since Lyn always signed her name L. Benjamin, Mt Zion’s administrator Michael Snyder assumed she was a man! He offered “Brother Benjamin” a place in the trailers owned by the ministry, where men helping in the ministry were housed. Fortunately, as correspondence with Lyn continued and plans were forming for her coming to work at Mt Zion, it became clear that she was a sister, and not a brother! Plans were duly adjusted for living arrangements. She came to Mt Zion in August 1992, with the intention of eventually returning to the islands to serve as a missionary. The Lord had other plans for her, and Miss Lyn stayed in Pensacola for the rest of her long and fruitful life. She was an important part of Mt Zion’s operations from 1992 until her second retirement at the end of 2008. During this time she worked in office, mailroom, and order fulfillment duties. From 2009 through 2018 she continued to help out at the ministry by filling orders for Mt Zion Prison Ministry. Miss Lyn was also a precious member of Mt Zion Bible Church. She played the organ for congregational singing almost every Lord’s Day until health needs prevented her. She was quick to speak of Christ, His preciousness, and His love to her soul. Her shy but cheerful smile still warms our hearts. Miss Lyn went to be with the Savior she loved on December 18, 2021, at 5:54 AM. We will miss her greatly. She is survived by her sister Audrey Viola Benjamin in St. Johns, Antigua. Visitation will be Thursday, December 23, 2021, from 1:15 to 2:00 PM, at Faith Chapel Funeral Home South. Funeral Service will follow at 2:00 PM. Pastor Jeff Pollard and Pastor Clarence Simmons will be officiating. Interment will be at Resthaven Gardens.

Eileen Ethlyn Benjamin, affectionately known to all as &#8220;Miss Lyn,&#8221; was born December 1, 1927, daughter of Ann (Martin) Benjamin and Ronald Benjamin. Her fervent love for Christ and longing for His return mark her memory in our hearts. Little... View Obituary & Service Information

The family of Eileen Ethlyn Benjamin created this Life Tributes page to make it easy to share your memories.

Eileen Ethlyn Benjamin, affectionately known to all as “Miss...

Send flowers to the Benjamin family.