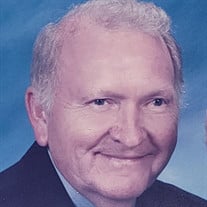 E.B. “Woody” Williams Jr. passed away peacefully on May 5, 2022 with his wife Mary Frances Williams by his side. Woody was born April 17, 1937 in Pensacola. He lived his entire life in Pensacola and passed away in Pensacola. He was preceded in death by his father, E.B. Williams Sr., his mother, Leo Williams, his sister Gwendolyn Williams, and Brother Larry Williams. Woody is survived by his Wife Mary Frances Williams, his sons Monte Williams (Patrice) and Dean Williams (Taunia), Grandson Robb Whitfield (Amber), Granddaughter Amber Box (Jonathan), Great granddaughter Aria Whitfield, Great Grandson Ian Box and brother, Roger Williams (Eloise). Woody carried out the role of husband, father, brother, and grand parent with strength and consistency. His impact on all who knew him and the community, cannot truly be measured. He led by Example!! He was born in the back of a taxi on Garden St. as they were trying to make it to his aunt’s house that once sat where McGuires is today. He grew up in the Brent area and graduated from Pensacola High School in 1956. While in high school, he delivered papers for the Pensacola News Journal, which at that time had to be done on foot or bicycle. He biked the largest paper route at that time daily. He then spent 2 years in the Navy on board the USS Suribachi. He returned home to begin his longtime career. He found work in the construction industry where he would have a big impact on many lives and careers. As a contractor for over 40 years, he constructed hundreds of homes. More importantly along the way he taught the trade and the business from the ground up to all of those worked with him and for him. His sons (Monte and Dean Williams) nephew (Danny Williams) and honorary son (Kevin Ward) all became local contractors and all have incredible respect and appreciation for the training, guidance, and advice he always provided. Many others went on to successful careers as well with help from his mentorship. Woody and his family were heavily involved in East Brent Baptist Church from its very beginning. He served as a Deacon, Record keeper, Chair of the building committee, and any other capacity called on. Truly devoted to God, Church, and Family. While he was a wonderful businessman, it was more important to him to help others and give back. He never asked for kudos or recognition. He would give anonymously to many at Thanksgiving and Christmas for example. Anyone who knew him will tell you his life is an example worth following and emulating him is a goal worth pursuing. He will be greatly missed but never forgotten. In lieu of flowers please either donate to East Brent Baptist Church at http://my.simplegive.com/eastbrent OR send a check to the Home Builders Association of West Florida, Inc. 4400 Bayou Blvd., Suite45, Pensacola, FL 32503. The service will be at East Brent Baptist Church on Monday, May 9, 2022 at 1:00 PM. The family will receive friends prior to the service from 12:00 PM – 1:00 PM.

E.B. &#8220;Woody&#8221; Williams Jr. passed away peacefully on May 5, 2022 with his wife Mary Frances Williams by his side. Woody was born April 17, 1937 in Pensacola. He lived his entire life in Pensacola and passed away in Pensacola.... View Obituary & Service Information

The family of E. B. "Woody" Williams Jr. created this Life Tributes page to make it easy to share your memories.

Send flowers to the Williams family.