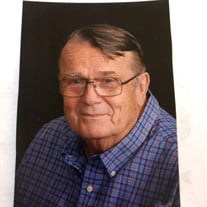 Duane Allen Savage died peacefully at home on Wednesday, January 19,2022. He was born September 12, 1941 in Owosso, Michigan, the son of the late Eldon and Flora Savage. He grew up and attended Bryant Elementary and Owosso High School where he developed life long friendships. He is survived by his loving and devoted wife if of sixty one years, Claudia Cooley Savage, daughter Sally Savage Romero(Bernard), daughter Patricia Bower (Jeffrey), daughter Pamela Martin. He is survived by grand children Danielle(Brendan) Kelley, Matthew Romero, Joshua (Jessica)Strickland, Zackery(Elisa) Strickland, Sarah(Robert) Vigil, Adam(MacKenzie) Bradshaw and Chloe Martin. He is survived by his great grandchildren, Jonah Strickland, Juliana Strickland, Ellie Strickland Hurd, Piper Strickland, Fisher Strickland, And Sterling Vigil. He is survived by one sister, Valerie Pierson and one sister-in-law, Shirley Savage, and numerous nieces and nephews. He was preceded in death by his parents, two brothers and one sister. Duane married Claudia Cooley Savage in 1960 and they started their married life in Pensacola, Florida where he was stationed. They moved seven times during his service in the Navy. Duane served in the U. S. Navy for 20 years and retired in December, 1979. He was a Senior Chief Aviation Electrician and was very proud of the work he did in the Navy. Six months after he retired from the Navy he received his Bachelor’s degree in History Education; another accomplishment of which he was proud. Duane developed a love of travel and was very proud of the fact that he and Claudia had traveled to all fifty states and fifty nine countries. He was never happier than when he was exploring new places. His last exploration was three years ago through the Scandinavian countries. He had slowed down a bit but still walked so we could explore. Duane loved his God, his family, and his church. He loved talking to anyone and hearing their stories. He worked for H&R Block for about fifteen years just so he could interact with new people. The funeral will be held at Myrtle Grove United Methodist Church, Lillian Hwy and 57th Street, at noon on Wednesday , January 26, 2022. Visitation will start at 11:00 A.M. services at noon with burial at 2:00 P.M. at Barrancas NationalCemetery on N.A.S. Pensacola. Memorials may be made to Myrtle Grove United Methodist lChurch Building fund (for repairs needed to the building) or to any choice of charity you have that puts a smile on your face. Duane will be sorely missed and heaven will be more fun because of his new home.

Duane Allen Savage died peacefully at home on Wednesday, January 19,2022. He was born September 12, 1941 in Owosso, Michigan, the son of the late Eldon and Flora Savage. He grew up and attended Bryant Elementary and Owosso High School where... View Obituary & Service Information

The family of Duane Allen Savage created this Life Tributes page to make it easy to share your memories.

Send flowers to the Savage family.