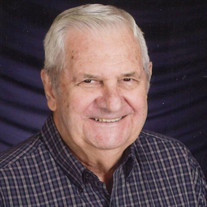 Donald Wayne Maxwell, 82, of Cantonment, Florida, passed away Tuesday, December 21, 2021 after a brief illness. Don was born on April 20, 1939 to Clyde and Letha Maxwell in Bristow, Oklahoma. After graduating from Pearsall High School, he went on to receive a Bachelor’s of Science degree in Physics from the University of West Florida. Over his lifetime, he enjoyed working at several occupations. He served in the United States Air Force and was deployed to Okinawa, Japan. He also worked as a contractor for NASA on the Saturn V rockets at Redstone Arsenal, Huntsville, Alabama. Don completed his career by retiring as a civil servant from the Naval Aerospace Medical Research Laboratory (NAMRL) aboard Naval Air Station Pensacola. Don enjoyed helping others. He was known for his ingenuity and being an extraordinary handyman. He volunteered at the St. Vincent DePaul Thrift Store and was a 17 gallon donor at the OneBlood donation center. He was a loving dad and grandpa and lit up when he was with his grandchildren. We, his family, were blessed to have him as our rock and protector and will forever feel the loss. Don was predeceased by his parents Clyde and Letha Maxwell, and his siblings Carl Maxwell, Doris Barnes, and Judy Baker. He is survived by wife Florence, children Donna (Mike) Moon, Gina (Tim) Shoffner, Connie (Richard) Clark, Tony (Ann) Thompson, Dianne (Jay) Watts, and brothers Darrell Maxwell and Jimmy Maxwell. He is also survived by grandchildren Danielle Perry, Evan Shoffner, Logan Shoffner, Mary Prescott, Joey Clark, Ryan Williams, Rachel Williams, Jessica Thompson, Jacob Watts, Jason Watts, and great-grandchildren Madeline Prescott and Charlie Prescott. Funeral Mass will be held at 12Noon on Monday, December 27, 2021 at St. Jude Thaddeus Catholic Church with Father George Thekku officiating. Burial will follow in Barrancas National Cemetery. The family will receive friends at 11am prior to services. Pallbearers will be Tim Shoffner, Evan Shoffner, Mike Moon, Joey Clark, Jacob Watts, and Jason Watts. The family requests, in lieu of flowers, that contributions may be donated to the St. Jude Thaddeus church building fund in Don’s name.

Donald Wayne Maxwell, 82, of Cantonment, Florida, passed away Tuesday, December 21, 2021 after a brief illness. Don was born on April 20, 1939 to Clyde and Letha Maxwell in Bristow, Oklahoma. After graduating from Pearsall High School, he went... View Obituary & Service Information

The family of Donald Wayne Maxwell created this Life Tributes page to make it easy to share your memories.

Send flowers to the Maxwell family.