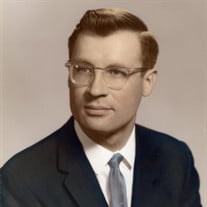 Donald Le Roy "Don" Horlander, 90, went to be with the Lord on Monday, January 3, 2022. Born December 12, 1931, Don, who was known for his quick-witted humor and his kind, gentle demeanor, lived his life in service to his family, his country, and his Savior. For twenty-two years of his life, Don served in the United States Air Force where he retired as a Master Sergeant. During his time in the service, he was a B-29 crew chief and a flight engineer for several missions during the Korean War. After his service, he transitioned to the computer hardware industry, using the skills he acquired while in the Air Force, and retired as a Senior Field Engineer. Don was a natural athlete in whatever sport he chose to play, including golf, horse shoes, bowling, tennis, handball, and softball. His talent in bowling even incurred a professional bowler contract, which he declined to serve in the Air Force. His athleticism continued even into his 80s as he would play so skillfully the sport he loved most: golf. He was faithful to God and served in many capacities through the years: secretary treasurer, nursing home ministry, youth recreation leader, Sunday school teacher, and usher. He also helped with church building projects both in Fort Walton and Pensacola. He supported his wife, Gayle in her many church activities, including the Sweethearts program, which raised money for missions. He was a longtime member of the First Pentecostal Church in Pensacola, FL. He was preceded in death by his wife of 10 years, Jo Ann, his wife of 43 years, Gayle, his parents Deryl and Katherine Horlander, and his sister Jean Lahmann. Don is survived by his children, Jan Lewis (David), Kelly Heiston, Keith LaCrosse (Cindy), Linda Kelly (Michael), and Thomas LaCrosse; nine grandchildren and 11 great grandchildren; many nieces and nephews, including Jean's daughter, Cindy Selden (Mark), and his dog Jilly Bean. The family would like to give special thanks to Emerald Coast Hospice for their assistance, to Lotoya, one of his caregivers, and to all that sent cards, called, and prayed for him. In lieu of flowers, memorial donations may be made to Emerald Coast Hospice or to the First Pentecostal Church Move the Mission fund at firstpent.org/give. A celebration of his homegoing will be held at First Pentecostal Church on Monday, January 17 at 11:00 A.M. with Pastor Brian Kinsey officiating. Visitation will be held from 10:00 A.M. - 11:00 A.M. Burial will follow at Barrancas National Cemetery, NAS Pensacola, FL Faith Chapel Funeral Home South, 100 Beverly Parkway, Pensacola, is entrusted with arrangements. You may express condolences online at www.fcfhs.com.

Donald Le Roy "Don" Horlander, 90, went to be with the Lord on Monday, January 3, 2022. Born December 12, 1931, Don, who was known for his quick-witted humor and his kind, gentle demeanor, lived his life in service to his family, his country,... View Obituary & Service Information

The family of Donald Le Roy "Don" Horlander created this Life Tributes page to make it easy to share your memories.

Send flowers to the Horlander family.