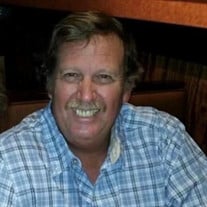 David Lewis Waldron- January 20, 1959- December 28, 2021 Born in Long Beach California to Ralph Edward Waldron Sr. and Barbara Jean Holley of Virginia Family is of the Baptist faith. David was born into a military family. Like most military families, David’s family moved often in his formative years. Although a challenging childhood, David made friends quickly and easily. He was funny, caring, smart and quick witted. David could make you laugh with his spot-on impersonations of popular celebrities like sports announcer Howard Cosell and Paul Hogan’s character “Crocodile Dundee”. From an early age, David excelled in sports, particularly baseball. David attended Kecoughtan High School in Hampton Virginia and was a standout baseball player in the mid-1970’s. He was an accomplished guitarist and songwriter, never failing to captivate those who listened to him play a Jim Croce or Glen Campbell song. After the premature deaths of his parents, David took on the role as protector to his two younger brothers. David gave up his dream of becoming a professional baseball player, and instead enlisted in the United States Marine Corps as an aviation structural specialist and a flying crew chief on a CH-53 “Super Stallion” helicopter. David was a highly decorated combat Marine, earning a Combat Action Medal in the 1991 Gulf War in Iraq. David retired from the Marine Corps after 20 years of service in 1999 and made Pensacola Florida his home. As a civilian, David continued his aviation career as a structural specialist on transport category aircraft. Working on everything from Boeing 767’s to Airbus A320’s. David would tell you that his greatest accomplishment was his four-decade marriage to his lovely wife Ann, their two beautiful daughters Barbara Jones (Lucas Jones) and Jessica Burton (SFC Jonathan Burton US Army), and their four grandchildren Lily, Abigail, Urijah, and Liam. David was a dedicated family man. During his life, David enjoyed rebuilding antique cars, he was a self-taught carpenter, electrician, welder and metal former. He was a licensed private airplane pilot and held a Federal Aviation Administration Aircraft Mechanics Certificate with an Airframe and Powerplant rating. David was our rock and protector. He was a loving husband, father, grandfather, and brother. Faith Chapel Funeral Home North, 1000 South Highway 29, Cantonment, is entrusted with arrangements. You may express condolences online at www.fcfhs.com.

The family of David Lewis Waldron created this Life Tributes page to make it easy to share your memories.

Send flowers to the Waldron family.