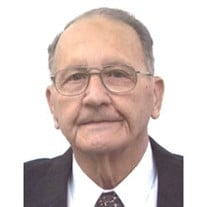 David Talley, age 88, went to be with his Lord and Savior, Sunday, October 31, 2021. He was born in Ducktown, TN on July 24, 1933. After high school graduation in 1951 he joined the Air Force where he served 8 years as a student and instructor in electronics, mathematics, and navigation. He was a Korean War veteran. While stationed at Keesler Air Force Base he met Faye Beagles. The couple married in December of 1953 and would have celebrated their 68th anniversary this year. In 1960, the couple returned to Pensacola where he worked at NAS Pensacola as a metrology engineer for over 27 years. During this time as an active lay leader at Olive Baptist Church, he began the audio "tape ministry", followed by the radio and television ministries that have impacted people worldwide. In 1987, he became the full-time Media Director at Olive where he continued serving more than 20 years. He and Faye also worked several years with Campers on Mission serving across the states from Key West to Fairbanks, Alaska. David earned a Bachelor of Bible Theology from International Bible Institute & Seminary and had a passion for studying the Word and teaching others. He enjoyed camping, photography, genealogy research and watching the New York Yankees. He was a devoted husband, father, grandfather, and brother. His family was everything to him and he loved them all dearly. He is survived by his wife Faye Talley; his son David Talley (Cindy) of Potomac Falls, VA; his son Paul Talley (Keri) of Pensacola; his daughter Susan Randolph (Rew) of Jacksonville, FL; five grandchildren Will Talley, Nicolas Talley, Ally Randolph, Sadie Randolph, and Charlie Randolph; two brothers Frank Talley and Victor Talley; and one sister Nannette Ballew and proceeded in death by his parents and sister Easter Johnston. Visitation will be from 6:00-8:00pm on Friday, November 5 at Olive Baptist Church. A Celebration of Life Service will be Saturday, Nov. 6 at 10:00am at Olive Baptist Church. Interment will be at Barrancas National Cemetery. In lieu of flowers, donations can be made to the Media Ministry at Olive Baptist Church, 1836 Olive Rd, Pensacola, FL 32514

David Talley, age 88, went to be with his Lord and Savior, Sunday, October 31, 2021. He was born in Ducktown, TN on July 24, 1933. After high school graduation in 1951 he joined the Air Force where he served 8 years as a student and instructor... View Obituary & Service Information

The family of David Lafayette Talley created this Life Tributes page to make it easy to share your memories.

Send flowers to the Talley family.